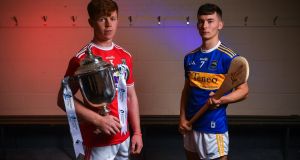 Cork captain James Keating and Tipperary captain Craig Morgan. Cork and Tipperary will face off in the first ever final at the U-20 grade at the LIT Gaelic Grounds this Saturday. Photo: David Fitzgerald/Sportsfile

History repeats itself for Tipp. Nine years ago they beat Kilkenny in the senior All-Ireland final and six days later turned out for the under-21 decider against Galway. Played – to the opposition’s chagrin – in Thurles, it played out like a festival of celebration for Tipperary hurling.

This is a bit different. For a start it’s to be played in Limerick and secondly, there isn’t the same crossover from the recently crowned seniors even if the under-20s introduced, once again proved very productive off the bench.

There will however be a jubilant Tipp following in attendance,

This year’s provincial decider was tighter with an exciting conclusion that saw late goals flying. Tipperary’s narrow win was of a kind with the two cohorts’ history at under-age, which has seen hardly anything between them and a replay at minor.

If Tommy O’Connell and Seán Twomey can be reined in, Tipp have the quality throughout the field from captain Craig Morgan, Paddy Cadell and Bryan O’Mara at the back up to senior Jake Morris, whose goal won Munster.

There’s also the sense that they have kicked on with the eight-goal demolition of Wexford in the semi-final but Cork, authoritative winners over Kilkenny in the other semi, will be there or thereabouts.