Rural decline has football in South Kerry on life support 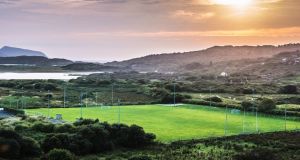 Gazing across St Mary’s pitch in Cahersiveen, Brian O’Sullivan considers its history. The club was founded in 1929 but the history of Gaelic Games in the village, sheltered on the banks of an estuary feeding in from the Atlantic, stretches back further. A lot further.

The grounds are named after Con Keating, a man killed in a car crash the Friday before Easter Monday in 1916 as he made his way to share a message with Roger Casement.

But it’s the area as a whole that’s worthy of attention.

This is South Kerry, an area with arguably a richer Gaelic Games tradition than any other and, perhaps more pertinently, a microcosm of an issue tormenting large swathes of the country – rural decline.

Follow the Atlantic breeze, up along the River Fertha at one end of Con Keating Park, and you enter Foilmore, where the local club amalgamated with St Michael’s club from Ballinskelligs, a half-hour drive up the road past Cahersiveen, in 1991. Head back past the pitch in town – where Maurice Fitzgerald perfected his art, kicking balls up and over the bar and onto the disused railway tracks behind the wall, and where Jack O’Shea was raised as a prospect and nurtured into the legend – and you reach Renard, the last stop before Valentia.

A short hop over the sea, to the home of Valentia Young Islanders, is a place where the rich visceral GAA culture is matched only by the surroundings. Like Fitzgerald and O’Shea back in town, this is where Mick O’Connell first leapt from the rustic landscape to fetch a ball from Kerry skies. He’s still there, of course.

Cross the bridge, joining the other end of Valentia to the mainland, and you enter Portmagee, the home of Skellig Rangers, and from there you follow the coast road through Ballinskelligs and around to Dromid Pearses and Waterville Frank Caseys territory, the latter being the club of the legendary Mick O’Dwyer. Derrynane and Sneem, further on up the coast, complete the eight-club cluster that forms the South Kerry district.

To drive from one end to the other, Foilmore to Sneem, along the meandering roads, takes the guts of an hour and 40 minutes, depending on the weather and the volume of tourist-crammed buses.

The clubs come together to form the South Kerry team that competes in the County Championship; more importantly, they become rivals in the quest for South Kerry Championship medals, the only true currency in this small part of the world.

O’Shea may be the greatest footballer of all time in some eyes, with seven All-Ireland titles and six All-Star accolades to his name, but down here he hasn’t won as many South Kerry medals as his brother, Pat. That, by and large, is what truly matters.

But as well as locking horns with each other within the whitewash, they are fighting the effects of rural decline more than most. Research conducted by Mary Immaculate College in Limerick found that even though the nationwide Gaeltacht population had increased by 20 per cent, the population of the Uíbh Ráthach Gaeltacht on the Iveragh Peninsula had plummeted by 40 per cent.

It all provides a rather staggering juxtaposition: as urban clubs, sometimes with little tradition, thrive; a place like South Kerry, responsible for producing some of the most recognisable names in the history of Gaelic football, struggles.

Yet vestiges of confidence remain.

“We’ve been in decline since the foundation of the GAA,” explains the St Michael’s-Foilmore club member. “There were years here when there were only four or five clubs competing.

“There was another strange one in the 40s. Derrynane and Waterville joined up for one year. They were known as the Liberators. But the year before they both had a junior team and a senior team.

“Everyone is involved now whereas before we had a massive population and not everybody was involved. There’s no child that’s not playing in South Kerry.

“When they move on from under-16 sides that’s where the challenge is. We would have had players here aged 15 or 16 playing with their senior teams.

The Kerry manager, Peter Keane, lined out for St Mary’s in his playing days, too. Only further scrutiny reveals this merely papers over the cracks.

Are people going to come back home to where they came from? They may not.

Valentia Young Islanders have been a club battling extinction for a few years now and, in local circles, it’s believed their senior side may have to call it a day over the coming months.

Less than a decade ago Valentia joined forces underage with Skellig Rangers, Derrynane and Sneem to form St Finian’s for a brief period. Even with the four clubs coming together they just managed to field a 13-a-side minor team.

Templenoe, another club with an All-Ireland title, are within the Kenmare District but have started playing underage football in South Kerry. On the face of it they’re a thriving club with four players on the Kerry panel, but they have also been forced to amalgamate with Sneem and Derrynane at underage level.

Inevitably, the fate of an area boils down to the basics: jobs and opportunities. And it cannot be said that initiatives haven’t been taken to curb the decline and, with that, fortify a future.

“You have digital hubs popping up in Sneem and there’s one planned for Valentia,” says Tadhg Evans, a local journalist with the Kerryman.

“Are people going to come back home to where they came from? They may not.

“There’s always potential for a place like South Kerry because it’s one of the most beautiful places in the world – that’s a good start to begin with. It has enormous pulling power in that regard.

“And the area would have got mass exposure through Skellig Michael appearing in Star Wars. There are people trying their best to harness its potential. But with the pull of your Dublins, your Corks and your Limericks, it’s very hard to reverse that.”

The bare facts don’t leave much room for hope.

“I actually think it’s remarkable, not just in Kerry but in many counties around the country, that the club system has held up as long as it has,” continues Evans. “I can only see it getting tougher.

“Clubs will intermittently head off and field teams on their own. But at some point they have had to amalgamate. St Finian’s was the standout of the whole lot.

“If you could provide the infrastructure for people to work from home those areas have a lot to offer in terms of quality of life, attractions, scenery.

“It’s something – an additional little pulling factor. And I applaud the people involved with those initiatives, but . . . ”

O’Sullivan, likewise, isn’t overwhelmingly confident regarding the future of digital hubs, pointing out that they “probably should have happened in the early 90s.”

But the people of the area were battling rural decline earlier than most and therefore feel confident in their ability to fight it even if, at times, the world seems to be pulling against them. Only time will tell if that confidence is misplaced.

Perhaps perpetually teetering on the brink of extinction has led to the development of this intrinsic indefatigability within clubs, and that will never be in doubt.

“If you read back to the 60s, Valentia were gone,” says O’Sullivan. “And they came back and won 10 South Kerry championships between 1979 and 2000. Sneem were gone for a while and came back to dominate.

“We’re depending on tourism. There are plans for a greenway but that’s been going on for years. It would want to come fairly fast.”

Eavesdropping in on his neighbouring club rival, Tony McCarthy, a former chairman of the St Mary’s club and for decades a stalwart, interjects.

“The likes of those council house schemes,” he exclaims, pointing to an estate just behind the walls of the grounds. “They aren’t being built anymore. We may not get many out of them but they bring families.

“But families are smaller now.

“We’d always be hoping that some fella would get a job – and have three or four kids. It all comes down to jobs.

“It’s a pity they wouldn’t send a few refugees and we’d make something out of them.”

For all the bleak forecasting, there’s always hope.

Earlier this year, Skellig Rangers were facing an uncertain near-future as they approached a county league fixture with St Michael’s-Foilmore. The amalgamated outfit had 28 players; the Portmagee side had 16. With the future of the club seemingly on the line, Rangers won handsomely.

And maybe that’s a more accurate summation of the South Kerry ethos than any other.

The existential threat is ever-present, but that cocktail of hope and resolve and overriding sense of identity lingers.