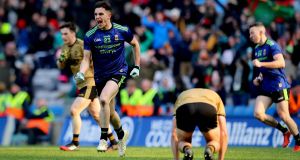 Although there has been much speculation on the future of the GAA’s 2020 championship, the consensus is that this year’s league won’t be completed. That has come as a big blow to TG4, the rights holders for the competition.

There has yet to be an official announcement from Croke Park and, although the administration remains hopeful that issues surrounding promotion and relegation might be resolved, it remains a function of the time available when restrictions are lifted.

Rónán Ó Coisdealbha, TG4’s head of sport, is realistic about prospects for the channel, which pioneered league coverage.

“Chances are now that the leagues are gone because there isn’t going to be a window to play them.”

The station’s priority and the GAA’s are two distinct things. Ideally, the latter wants to complete the composition of the 2021 leagues, whereas for TG4, the loss of the latter stages of the competitions is a major loss of audience.

Last year’s league finals were, together with the All-Ireland women’s final, the top three broadcasts in terms of numbers, with the AFL decider between Mayo and Kerry bringing TG4 its biggest viewership of the year at 265,000.

“We lost the last three weekends of the [2020] Allianz League and, looking back to last year, the league finals in hurling and football were two of our three highest-rating games, so in terms of advertising and commercial income, like any other broadcaster, we’ve taken a hit,” says Ó Coisdealbha. “The season was suspended just before we were going to broadcast the hurling league quarter-finals. It has a huge impact.

We’re all trying to come up with contingency plans, which is the only thing sports organisations can do

“It’s the same for others. Anyone who has sold advertising and sponsorship around live coverage of matches has lost that money. It’s a huge issue for anyone with sports rights.”

Ó Coisdealbha is also dealing with TG4’s rugby rights, equally in abeyance, but all sports are hamstrung by the uncertainty surrounding the current crisis.

“It’s extremely difficult when nobody knows when we’re going to have live GAA back,” he says. “For instance, we’ve schedulers who have to plan three weeks in advance for TV listings. That’s nothing at this stage. It’s difficult to plan and to schedule that.

“We’re lucky that we have the old All-Ireland Gold and Laochra Gael programmes but it’s a tough time. We’re all trying to come up with contingency plans, which is the only thing sports organisations can do. Everybody’s sitting by, ready to go whenever we get the green light.”

The knock-on effect for production companies is also severe, and Ó Coisdealbha says that TG4 is discussing ideas with their programme-makers to improvise a response to the gaps in the broadcasting schedules.

Given that any accommodation of a resumed season will involve very crowded schedules, might there be an opportunity for the station to acquire some championship rights?

“It’s a good question but it’s really a call for the GAA themselves. If you look at the broadcasting policy at the moment, it’s forbidden to have two championship matches on different channels at the same time – I know it happens in the final round of the Super 8s but not at other times.

“It’s too early to say and, in fairness to the championship rights holders, RTÉ and Sky they’ll want to cover as many matches as possible to make up for lost time if there are no fixtures in May and the first half of June.

“We normally do the midweek under-20 games during the summer and they do really well for us. We’re even thinking what’s going to happen to them. All we can do is sit and wait.”

The GAA announced on Thursday that a second championship match has been cancelled this summer: Connacht champions Roscommon’s opening round of their defence against London, due to be played on May 2nd, which was to have been this year’s opening fixture.

As expected after the calling-off last week of Galway’s match in New York in the same championship, the fixture will now not take place. This was confirmed on RTÉ Radio 1’s Morning Ireland by GAA head of games administration Feargal McGill.

Despite speculation that any lifting of the current public health restrictions would not come until such a stage that this year’s championship would have to be played on a knockout basis, McGill said that the GAA was hopeful that it would be possible to play All-Ireland qualifiers as well as purely knockout provincial championships. All round-robin formats will not, however, go ahead this year.

“The same as any sporting organisation, the key to drawing up a fixtures schedule is knowing exactly how much time we have to play with and, at the moment, unfortunately we just don’t know what time is there,” he told RTÉ’s Des Cahill.