Stalled Casement Park project will not be downsized, says GAA 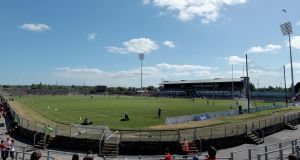 Casement Park in Belfast: the 38,000-capacity project has been in planning limbo for five years. Photograph: Morgan Treacy/Inpho

The GAA has ruled out downsizing the proposed stadium at Belfast’s Casement Park, which has been ensnared in the planning process since the 38,000-capacity project was turned down nearly five years ago.

Speaking at the launch of his first annual report, director-general Tom Ryan said the association would “do its best to deliver” the redevelopment.

“There has to be a stadium built at Casement Park. There has to be – Belfast needs it. We don’t really have an alternative option, and if we are to look at downsizing it, we have to go back to the start of the process again, go back through planning and new physical configuration of the stadium.

“So no, it is full steam ahead with the project as it is configured at the moment and with the financial commitment that we have made to it.”

He added that the plans to put £15 million into the project hadn’t changed, even though “the financial projections and the financial package that surrounded all of that date from 10 years ago”, but that the association hadn’t so far been asked for an increased contribution and the “vast, vast predominant amount” will not come from the GAA.

The situation has been further complicated by the failure to reconstitute the Northern Ireland Executive over the past two years.

Ryan was circumspect about the financial troubles in Galway, where the findings of an independent audit were described as “damning” by county chairman Pat Kearney, but talked of the difficulty in balancing voluntary officers with professional back-up.

“I’m not going to comment on any particular person or county, but I’ll talk about the generality of things. You’ll see it referred to in one or two places when we talk about financial support and the whole issue of governance and how we manage our affairs.

He also posed some interesting questions about the governance of the association.

“Congress is our ultimate decision-making body and is the means by which we enshrine and vary our rules,” he writes. “However, sometimes that can mean that rule-making becomes the main purpose of the assembly and that we miss an opportunity at Congress to discuss policy or strategy.

“Similarly, not every situation is best governed by a rule. Sometimes issues arise which are best gauged in terms of principle or policy rather than the confines of a rule. Even the best-crafted rule cannot cover every nuance and sometimes interpretation is called for. There were one or two well-documented such instances this year alone.”

He cited the issue of collective training trips during the club month of April, during which county teams were forbidden from taking part in such activities – a restriction Ryan said had widespread support.

“However, rules-based enforcement proved fractious. In the end, self-policing proved to be the only realistic way of enforcing the rule, so we asked counties to assess themselves whether or not they had contravened the rule and to disclose their county panel schedules over the period.

“The responses were varied. It turned out the only counties to be sanctioned were those three – Laois, Armagh and Waterford – who were brave enough to concede that they had strayed and to put the association’s principles before their own self-interest.

“There is every chance that they were not the only offenders, and so those three counties felt aggrieved and the approach was derided in some quarters. I do believe, however, that we are entitled to trust our county boards and to expect integrity on their part. To do otherwise would be an indictment of our structures and ethos.”

He added that the association had taken no steps to prepare for a disorganised Brexit followed by the reintroduction of a hard border.

He cited currency fluctuations and, more importantly, the disruption to ordinary members.

“But it’s very, very difficult to plan practically for something when you really don’t know what the shape of it is going to be. We’re two months away from it and we still don’t know.”