Tom Ryan: GAA were ‘uncomfortable’ bending the rules and so have decided to change them 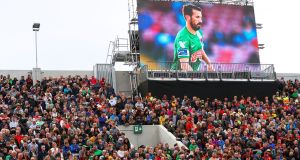 The clamour to move the Liam Miller tribute match from Cork City’s soccer ground to Páirc Uí Chaoimh in order to benefit from the far greater capacity placed the GAA in a difficult situation. Photograph: Inpho

The controversy generated by the Liam Miller tribute match last September was the main influence on a motion to go before February’s annual congress, which as revealed in Wednesday’s The Irish Times, is to provide for sports other than Gaelic games to be played at GAA county venues.

This motion has been advanced in the past, frequently by Clare club St Joseph’s Miltown-Malbay, but the fact this year’s proposal is to come from Central Council immeasurably strengthens its prospects of success.

The most recent tabling of the motion in 2016 met defeat with fewer than 25 per cent of the votes in favour. That would normally mean the motion couldn’t be heard again for another three years but there is a provision for Management Committee to waive the restriction in exceptional circumstances.

Should it go through, it will be the first major extension of the rule governing the use of GAA grounds since Rule 42 (now Rule 5.1) was modified in 2005 to allow rugby and soccer internationals to be played in Croke Park during the reconstruction of Lansdowne Road.

In Tom Ryan’s first annual report as director general, he revisited the pressures created by the public outcry that greeted the GAA stance that a soccer match couldn’t be played in the new Páirc Uí Chaoimh as it was contrary to rule.

Given that the event was intended to provide funds for the family of Miller, a former soccer international who died at the young age of 36. The clamour to move the match from Cork City’s soccer ground to Páirc Uí Chaoimh in order to benefit from the far greater capacity placed the GAA in a difficult situation.

“Much of the clamour that arose,” Ryan says in his report, “amounted to demands for us just to ignore own standards and indeed our decision makers. To ignore the rule or find a loophole and host the game. As a body charged with trying to uphold standards we should not be in the business of finding ways around our own rules . .

“The overwhelming sentiment being that we felt we had been bullied into a course of action that we might well have taken anyway if given the chance.”

He elaborated that the decision was taken to avoid reputational damage.

“You could argue that some of the aims of the association extend into community and being a force for good in the country. That’s the interpretation that we had to take and look at the broader picture – are we doing more damage to the association by relying on a very, very literal interpretation of what’s in the rule book and does the spirit of what’s intended allow us to undertake the route we took?

“I don’t mind admitting it was a stretch of things. That’s the part that was probably the most uncomfortable about the whole thing.”

He confirmed that Central Council would address the matter in a motion to congress and although reluctant to go into details until the motions list is published, said when asked would there be proposals to allow Central Council approve county grounds for the use of other sports:

“I suppose without pre-empting things that is the thrust of the one that will be coming from Central Council.”

Earlier in January former Ireland rugby captain Donal Lenihan suggested that Munster could play a home semi-final in Páirc Uí Chaoimh if they ended up with ‘home country’ advantage in this year’s European Champions Cup semi-final.

The Cork stadium was at the centre of more than one controversy in 2018 with the rumbling contention over the cost of the Cork stadium’s redevelopment also arising during the launch of the report.

Croke Park stadium director Peter McKenna suggested the cost of the venue could reach €110,000,000 but Cork county chair Tracey Kennedy said that her committee believed the cost would be nearer the stated final cost of €86,000,000. A special committee, with input from Croke Park, will oversee the stadium.

Ryan, formerly the GAA’s chief financial officer, pitched the ultimate cost as somewhere in between:

“I suppose the 110 number is the worst, worst case. From a financial perspective in terms of my own way of thinking about things . . . you start at the most conservative estimate and in all likelihood things will be better than that.

“Eighty-six is what they call the construction cost to date. Without getting too technical about it, there are some other costs relating to the construction that will be categorised as different things in the accounts.

“There are four key things that are still at issue: one is arbitration with a contractor; there’s a tax question; there’s one or two other bits of negotiations on things to be resolved and there’s a significant asset sale – all of which will nudge the cost down towards the number you referred to from Cork.

“I’m not being evasive; I actually don’t know where it’s going to be in that range. It will only be when those three or four processes are complete that we’ll know finally where it ends up.”