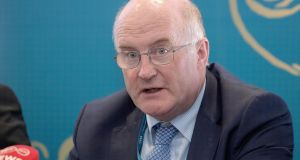 Leinster House is covered in protective screens, as refurbishment on the parliament building continues. They provide an opportune canvas for proclaiming the centenary of Dáil Éireann, marked last week in the original setting, Dublin’s Mansion House.

On Tuesday a matter of days after that milestone, Seanad Éireann, the step-sibling of the Dáil and brainchild of the 1937 Constitution as a replacement for the old Free State Senate, conducted a curious piece of business – an address to the house by GAA president John Horan.

It was curious in that it didn’t command much advance publicity and it was the first time that the president of the association (which is of course 35 years older than Dáil Éireann) had been invited to address one of the Houses of the Oireachtas – as provided for under the procedures of the Senate, allowing ‘people from public and civic society’ to appear before the House.

Horan’s address covered a range of topics, none likely to start a row – or on a given night even a conversation – in a club bar, but a snapshot of broader concerns in the life of the association as filtered for a legislative assembly: acknowledgement of the crossover between the GAA and politics, gratitude for public funds, the social value of the association as both a recreational outlet in increasingly sedentary times and a ‘focal point in the community’.

There were also more direct hits. The question of sporting infrastructure – a particular concern in Horan’s own county, Dublin – was raised.

“Green space and sports facilities are the lungs that communities use to breathe. Without them, we can see how areas can feel closed and claustrophobic and choked – starved of the oxygen that sport, any sport, can provide.

Referring to the ever-closer ties between the association and its sister sports camogie and women’s football, he announced that next month’s annual congress would hear a motion to put the CEOs of the two women’s organisations onto the GAA’s management committee.

This wasn’t going to be a hard audience. The nature of the invitation made that obvious but so did the very crossover between the GAA and politics that he had initially referenced.

The association is well represented in the Senate and a number of the senators have had high-profile roles in the GAA. Leader of the House Jerry Buttimer – who together with Cathaoirleach Denis O’Donovan issued the invitation – was a member of the Cork county executive, John O’Mahony managed All-Ireland-winning teams and Paudie Coffey hurled for Waterford.

Much of the interaction was positive with speakers commending the work done by the GAA and acknowledging policies such as the distancing of the association from gambling and alcohol sponsorships.

There were, however some more querulous notes struck. Last week’s announcement of admission price increases surfaces, as does the Sky television deal.

Aodhán Ó Ríordáin was one of those to express that concern: “Cost needs to be re-examined when it’s the difference between going and not going [to matches] or watching and not watching”.

Without taking the president’s senate experience into Julius Caesar territory, Sinn Féin senator Rose Conway-Walsh details a list of questions, including the above matters but also launches the most party political point of the afternoon, quoting Rule 1.2 from the GAA rule book:

“Basic Aim – The Association is a National Organisation which has as its basic aim the strengthening of the National Identity in a 32 County Ireland through the preservation and promotion of Gaelic Games and pastimes.”

She asks what steps the association has taken to engage in the conversation on national unity.

(Presumably, ‘the preservation and promotion of Gaelic games and pastimes’.)

Horan was more assured when dealing with the price increases than he had been a week previously when a detour into corporate speak – “business structure” and “our product, our games” - caused annoyance. But no matter how worthy the projects to be funded by price hikes, they are a hard sell.

In a way the most interesting contributions came from those with a non-GAA background, outlining how they became involved. Victor Boyhan refers to his Church of Ireland upbringing in Monkstown (“halfway between Cuala and Kilmacud Crokes”) and how despite problems – “even playing on a Sunday in the 1960s” – he became interested in hurling.

The GAA faces a number of difficult issues in the next couple of years: finding optimum championship structures, rebalancing the club-county fixtures and coping with whatever challenges a redrawn EU might create on the island.

These weren’t up for discussion in the Seanad but the event demonstrated one of the GAA’s proudest claims – that it retains a central place (or ‘relevance’ as the president puts it) in the life of the country.

That sense of connection between the GAA and the community at large was vividly and sadly evident in a number of references by speakers to the awful road accident at the weekend in Donegal, which took the lives of four young men: John Harley, Shaun Harkin, Mícheál Roarty and Daniel Scott. The GAA president offered his condolences to the families.