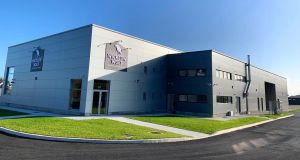 Wicklow Wolf is providing contactless orders from its brewery in Newtownmountkennedy

Listening to Bob Coggins is enough to bring a tear to the eye of any fan of craft ales, lagers and stouts.

“We’re going to have to pour a lot of beer down the drain if we can’t get to package it soon,” says the commercial director of Sligo-based craft brewer White Hag.

The independent brewery, like many others in Ireland, has been left reeling from the impact of the Covid-19 crisis. With borders and bars closed, they are having to come up with alternative ways to get their beer out to customers.

“We’re usually producing beer about three and a half weeks ahead of time so we’ve got tens of thousands of litres of beer coming out that we have nowhere to send because 50 per cent of it usually goes to export and that has stopped as have draft sales. There is a bit of pick-up in off trade but one of the challenges to us as an independent brewery is that much of that is urban-centred shops and off licences so the big challenge is getting our beer out to people around the country,” he says.

“We have tried to switch the focus to online, but we’re stuck because there are only a certain amount of cans available and the supply chain has gotten tighter so we’re looking to ship the beer we have as quickly as possible to get some cash in and then buy more cans quickly because we can’t just leave beer sitting in tanks for a long time,” Mr Coggins adds.

White Hag and other independent producers are hoping that while our social lives have been seriously curtailed, there is still demand for beer. They are looking to persuade drinkers to continue to choose craft beer by making it as compelling as possible to support it.

The Sligo brewery is for example, hosting an online beer tasting next week with plans to send out beer ahead of time to supporters.

“We’d typically do tastings in pubs or off-licences when we have new stuff coming out but obviously can’t do that right now so we’re hoping this might be a way around that,” says Coggins.

So far the response to the plan has been positive, as is the case with Wicklow Wolf’s recent decision to offer contactless beer collections from its brewery in Newtownmountkennedy.

“With most of our avenues for selling beer closing overnight, we thought long and hard about how we could best serve customers in our local area while protecting our staff, continuing to pay our suppliers and so on,” says marketing manager Darryl Murphy,

“Customers can order cases of beer via our online shop, pull up outside the brewery and we’ll load them into the boot. It’s all about keeping the doors open for us,” he adds.

In Co Waterford, Claire Dalton, one of the founders of the Dungarvon Brewing Company, says it has a lot of stock currently because it was busy gearing up for St Patrick’s Day. It has stopped production for at least two weeks. Dalton says she expects it to be a tough balancing act deciding when to start it up again as most of the brewer’s customers will likely still have stock to hand.

“The on-trade side of the business has completely dried up, but we’re still supplying supermarkets and off-licences currently and we’re busy trying to get our online store up and running. We are limited though because independent breweries can only sell a minimum amount of 24 quarts, which works out at about 18 litres or three cases per sale. That’s a lot of beer to ask people to buy, but at least it means we can still get it out to people,” she says.

It’s obviously not just breweries that are quickly having to adapt to changed circumstances. Geoff Carty and his wife Maire of The Headline bar at Leonard’s Corner in Dublin 8 are more used to pulling pints than packaging products. However, after having to close the gastropub, the couple are now selling beer and wine online that they deliver themselves in Dublin.

“This came about because we have our own range of beers and we usually have them in kegs but occasionally can them and sell to regulars. We’d just canned a load before we had to shut the bar and so were left with beer that had to be sold quickly. So we looked at shifting that and all the extra stock we’d got in for St Patrick’s Day by selling it online,” he says.

“We figured it made sense to sell a few brands online rather than just ours so we spoke to Third Barrel and got them and a few others on board.

“Customers are actually really appreciative and want to support us. We think that because people might not want to go to the shops that they will want to get deliveries so we’re confident we’ll do alright with this,” adds Mr Carty.

He ruled out continuing deliveries once the bar reopens, but in the interim, the couple is also looking at offering meals cooked by their chef for delivery.

Third Barrel’s head of marketing Kevin McKinney says teaming up with the bar had been a godsend given that its main routes to markets had dried up.

“Around 70 per cent of what we produce is exported, mainly to Italy, France and Spain, which are obviously on lockdown. On-trade is also off-limits following the pub closures, so Geoff and Maire’s service is a big help in keeping us afloat. Luckily most of our last batch of exports went out in late February. We have some beer still in the tank that we’re unsure what to do with and we may have to dump it depending how long the crisis goes for,” he says.

“We haven’t been hit too hard yet and we’ve got great supporters with many suppliers letting us stretch out outstanding payments and so on. Providing the crisis doesn’t go on too long and we can sell stock in the meantime, I’m confident we can keep going,” McKinney adds.