Keith Duggan: Jim Gavin and the joy of studied nothingness

The Dublin manager keeps his emotions in check as his team make 50,000 people go berserk 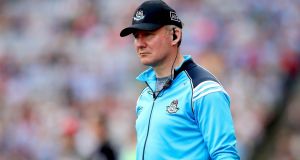 Jim Gavin: The demeanour – the deliberation, the composure, the never-under-any-circumstances-be-ruffled drives some people around the twist. Photograph: Ryan Byrne/Inpho

You only have to watch Jim Gavin taking a drink from his water bottle to understand that he’s a man who firmly believes that there is a right way and a wrong way of doing things. Anybody who has taken even a passing interest in the All-Ireland championship couldn’t but have seen television footage of the Dublin manager periodically quenching his thirst while observing his team destroy and demoralise whatever county happens to be up for destruction and demoralisation on a given Sunday.

Nobody does it better. It has become fashionable now for all managers to be seen to keep their emotions in check. The days of the manager-as -boulevardier – ever patrolling the sideline, raging war with the skies, playing every ball and dying with every missed chance –have passed.

Even if things fall apart, you have to present the veneer of cool. You can’t be doing the King Lear stuff, not if you’re looking for that three-year extension from the county board. That’s why the water bottle is often the only giveaway of the torrent of emotions beneath the facade of control.

Even now, championship managers become so lost in the moment and the emotion of the day that when it comes to the simple act of taking a drink, they possess all the finesse of a toddler, gulping, spilling, then flinging the bottle away in a state of high anxiety, only to become distracted when they can’t find it 30 seconds later.

Sometimes you see dozens of discarded water-bottles at a manager’s feet, as though they’d been transported to some 1990s rave.

Gavin is different. Since he took over in 2012, Jim Gavin watches All-Ireland finals in the fashion of a man in the better seats at La Scala. The reason we see the Dublin manager re-hydrating so often is because the television director knows it’s probably as animated as Gavin is likely to be all day. For most of the match, he is a study in still life.

When Dublin do something beautiful, 50,000 people go berserk while the guy who actually coaches them mostly just sits there like an invigilator in a Junior Certificate examination hall. The demeanour – the deliberation, the composure, the never-under-any-circumstances-be-ruffled drives some people around the twist. They interpret it as smugness, as superiority.

Is it that simple, though? There’s a great photo of Gavin minutes after Dublin won the 1995 All-Ireland. He’s on his knees and he’s over-the-moon; exuberantly overjoyed. And it’s hard to reconcile that the player and the manager of the Dublin senior football team are, in fact, one and the same cat. But they are.

When Gavin took the post five years ago, he made repeated reference to upholding the tradition and principles of the city game as espoused by Kevin Heffernan and coaches of a similar vein. He decided straight away that he wasn’t going to be the story and his public pronouncements have, by and large, been comically narrow in range. He makes no pretence of the fact that hangin’ with journalists does not constitute the fun time in his life: Gavin in press conference mode is a vivid tableau of the brilliant Wodehouse line about a man who “if not actually disgruntled, then he was very far from gruntled”.

He hasn’t needed to say anything much. Instead, he has taken what was, unquestionably, a deeply talented and just plain deep squad of ball players that were some ten years in the making. He took also the necessary coldness and arrogance instilled by Pat Gilroy’s 2011 All-Ireland winning side. And he has elevated the standard of internal expectation so sharply that at their best, Dublin are dizzying for everyone else to behold.

This summer, they responded to the setback of losing their bid for a fifth league title in a row to Kerry by simply crushing everything in their path. Or rather, they dismantled opposition teams with a kind of precision and patience that has been at once beautiful and eerie to watch. The original team – the wild horses of five years ago – seem juvenile in comparison to what they have become.

Jim Gavin has engineered all this. It presents a contradiction: how can such an apparently remote figure also be the architect of a football team that plays with such verve and expression and passion?

When you think about it, Jim Gavin is in a very weird and lonely place. His lengthy playing career was characterised by Dublin teams that won a share of Leinster titles and then endured a four year struggle to claim that single All-Ireland. They would wait until 2011 for the next one. So this new dispensation is as new to him as it is to us. It’s hard to know how he should or could behave on the sideline without attracting annoyance. If he displays joy and emotion as his teams run riot through county after county, how is that going to come across? Studied nothingness may be the best way to go.

Here’s the thing about Gavin: yes, he’s the guy who was given all the resources of backing and the players that other managers would kill for. But deep down: would they? For with that came an extraordinary pressure and obligation to make the big machine work. What he has done has been phenomenal. It’s one thing having all these first-choice players. It’s another keeping them satisfied regardless of playing time.

Watertight as the Dublin camp has become, it’s fairly obvious that he is true to his word in running a non-preferential camp and that he maintains a scrupulous distance from the players he coaches and manages.

One of the defining traits of his time with Dublin is that no player, regardless of reputation or accomplishment, can feel assured of his place.

All of that has led to what is, by any standard, one of the more extraordinary sights in modern Irish sport: the current Dublin bench. There they have sat, the magnificent seven unhorsed: Brogan, Macauley, Flynn, Connolly, McMenamon, O’Gara, Costello; arguably more recognised and certainly more decorated than many of the starting fifteen.

It takes true audacity to leave players of this calibre sitting for most of the summer, living on their wits and wondering if it’s all over. You have to assume it’s nothing personal: that Gavin believes there’s a right and wrong way to do things and that while he is sitting there in complete absorption, he’s doing no more or less than what he always says: looking for a complete performance from the Dublin senior football team.

And it’s his first big gamble. There is a good chance that when it comes to the wire on Sunday, he’s going to turn to those reserves – certainly to Connolly and probably to Brogan – and ask them to go win the day. That may be the moment when human complexity obscures the aesthetics and clarity of Gavin’s vision.

Will they be ready – mentally and psychologically – when they are called upon? They are people after all. And they are players. And players want to play. Sunday will be the proof of whether Jim Gavin has truly convinced his glittering cast of principals that it’s the opera that matters and not their role in it.