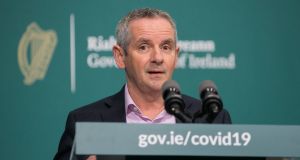 HSE chief Paul Reid during the launch of a Government plan to support the community response to the coronavirus pandemic. Photograph: Gareth Chaney

The Irish coronavirus crisis is like an unpredictable war against a silent and dangerous enemy that can only be won if people rigidly obey social distancing rules, HSE chief executive Paul Reid has said.

Mr Reid warned that a small minority of people in the community are “putting lives at risk” because they are not respecting social distancing guidelines in what has become a “war” against the pandemic.

The State’s response to the Covid-19 emergency was now entering an unpredictable and dangerous phase and the main tool at our disposal was for the public to be rigorous in maintaining social distance, Mr Reid said

He was speaking at a briefing at Government Buildings on the responsibilities of the community. It was also addressed by Minister for Rural Affairs Michael Ring and Minister of State for Communities, Sean Canney.

”I think the actions (being asked of population) right now are very significant and challenging for people. I think the vast majority of people are taking actions,” Mr Reid said.

“The smaller minorities who aren’t, what I say to you, you are putting lives at risk.”

The briefing also focused on volunteering, on community participation, and on the need to reach out to older and vulnerable people, who may feel isolated and cut off because of social distancing.

Mr Ring slammed false social media posts which added to the anxiety of older people. He said the large technology companies had a moral responsibility to find and act on the false information being circulated on social media platforms. “I am calling on these companies to monitor social media and if it’s false to take it down immediately,” he said.

It was also announced that all national parks will remain open this weekend and people will be encouraged to visit them as long as they strictly adhere to the social distancing protocols in place.

Responding to concerns expressed about the capacity of intensive care units to cope with a large surge in serious coronavirus cases, Mr Reid said that the HSE had been building plans to ramp up capacity since January. “We have been in dialogue with private hospital groups which will involve utilising capacity from private hospital groups.”

He said procurement of ventilators would also be ramped up. About 300 new units were in the process of being procured as well as 80 to 100 each week, with 1,000 taken out of storage.

But he said the conversation should not be about ICU capacity. He said it should be about doing exactly what they have been asked to do.

“ If we relentlessly do everything we ask the public to do, that makes a big difference,” he said.

Mr Reid said that in less than two days 40,000 people had registered on the Be on Call for Ireland site to volunteer to the health services. He says they will now begin working through the list, with particular emphasis on nurses in the first instance.