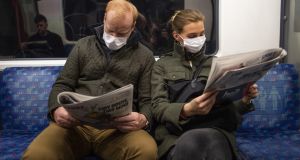 A couple sit on the Central Line Tube wearing protective face masks while reading a newspaper: London’s City AM has decided to suspend printing from Monday. Photograph: Justin Setterfield/Getty Images.

The tweet was as succinct as you might expect from a newspaper editor. “It’s a great shame that @CityAM is pausing its print operation, but it’s the right thing to do,” wrote Christian May, editor of the daily financial title, which has (or had) a circulation of about 86,000 in London.

While the board and management of City AM media group are “committed to restarting the print product as soon as possible”, the newspaper will from Monday be available online only, while staff will only receive 50 per cent of their pay in April.

“Life in London has changed so much, so quickly, that we must adapt if we are to survive,” tweeted May. “And we will survive.”

It is not the first title to have stopped printing as a result of the pandemic, but its announcement highlights the special challenges faced by newspapers in covering the coronavirus crisis.

Around the world, journalists at newspaper groups, broadcasters and online-only media outlets are devoting resources to a story bigger than most will ever have covered before, and one that accelerates in many directions at once while having no clear end date in sight.

Like those in many other sectors of the economy, they face new logistical challenges in continuing to stay in business at a time when the information they provide is more needed than ever.

But while online and broadcasting news audiences have surged, for some printed newspapers, the virus could hasten, at least temporarily, their long-term trend of circulation decline.

Most titles rely on sales in shops or stalls that have now either closed or are seeing much-reduced footfall as a result of the quarantine policies imposed in some countries and the social distancing and self-isolation practices advised in others.

The impact will be more acute for titles that have yet to build up digital subscription businesses and still rely heavily on print circulation, but have weak home delivery networks.

For City AM, a business-focused newspaper distributed in a high-footfall area, there would have been little point in continuing to print as before. Print readership among London commuters is a visible phenomenon for the simple reason that it is impossible to get a phone signal on the Underground, but now those commuters are thinning out and some stations have been closed.

Footfall isn’t the only issue. As scientists continue to study the lifespan of the virus on surfaces, there’s a newfound societal wariness about the sharing of physical objects, especially in communal spaces.

And then there are the editorial ramifications. While there’s a vast audience for the unprecedented coronavirus developments, for some readers, their lifelong imperative to buy a favoured newspaper - to consume sports coverage, for example - may no longer be there in quite the same way.

The sudden reality is that some content no longer makes sense to run and some content, along with its associated advertising revenues, has simply gone.

City AM is not the first title to stop the printing presses. In Portland, Oregon, a nightlife-covering “alt-weekly” called the Portland Mercury announced a temporary cessation of printing last week shortly after a new ban on large gatherings was introduced.

Its publisher explained that its advertising base was directly tied to music venues, theatres, bars and restaurants and had “virtually disappeared overnight”. Meanwhile, across the US, other newspapers have cut print runs and employee hours at what was already a fragile time for local and city titles.

Some newspapers have been in a position to drop online paywalls on some or all coronavirus stories. Others depend upon continued subscription revenue to keep paying staff. The variety of responses reflects what a bizarre-seeming and unfamiliar an international crisis of this scale is to, well, everybody.

Newspaper publishers have in recent years deployed a succession of desperate freebie measures in a bid to keep print circulation afloat. For anybody who has been tracking them, there is something wryly innovative about the image of a Manchester street vendor encouraging panic-buyers to purchase a newspaper by giving away toilet roll with each copy.

But there is nothing funny about the news inside newspapers these days. In Italy, they are now about as tragic as they can be.

One video that has been shared widely online shows a man solemnly counting as he turns the pages of the L’Eco di Bergamo newspaper in the northern Italy city. On February 9th, the title ran one-and-a-half pages of obituaries. On March 13th, 10 pages were needed to pay tribute to those lost to Covid-19.