Taoiseach says school closures could be extended into April or May 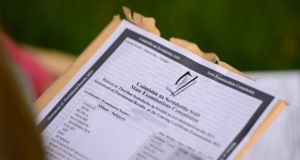 ‘The reality is if the Junior Cycle wasn’t to go ahead, it would free up resources’. Photograph: Bryan O’Brien

The Department of Education is considering cancelling the summer Junior Cert exams for tens of thousands of students in a bid to prioritise the Leaving Cert if schools do not reopen.

The move is one of a number of contingency plans being examined by officials in response to the coronavirus threat.

The Minister for Education said this week that his department is currently working on the assumption that the Leaving Cert will go ahead as planned.

However, he said cancelling or deferring the Junior Cert could free up exam staff, which would allow for the use of a greater number of exam halls or centres with fewer students.

He cautioned that it was one of just a number of options or contingency plans discussed during a conference call with State Examination Commission officials on Wednesday.

“Yes, that is a reality if the Junior Cycle wasn’t to go ahead, it would free up resources.

“The corollary to that is that if we can get through this and are in a position to allow students to go back to school before these exams start, we’re in a position of carrying out the two exams.

“Whatever decisions that need to be made will happen swiftly and in the best interests of the students.”

He said the ideal scenario was the virus would peak towards the end of April, but that was a hypothetical situation and authorities will be guided by health advice.

On Thursday night, Taoiseach Leo Varadkar said school closures could be extended into April or May to combat the spread of coronavirus.

Officially, schools, colleges and childcare facilities are to be closed until March 29th.

However, health authorities have acknowledged the situation is not expected to improve by the end of this month, and that the pandemic could continue for a number of months after that date.

Some 65,000 students are due to sit the Junior Cert this year, while a further 60,000 are scheduled to sit the Leaving.

In the meantime, Mr McHugh announced on Thursday that oral and practical performance exams for this year’s State exams will be cancelled, with all students receiving full marks.

The deadline for submission of practical and coursework for the Leaving Cert has been extended to May 15th.

Mr McHugh said this was the fairest response that could be taken in the circumstances as “it guarantees that no student will score less than they would have if schools had been operating as normal”.

“I hope this decision will ease some of the pressure that students are feeling and allow them to focus more clearly on completing project work and preparing for written exams,” he added.

The move has sparked a mixed reaction from students who have been preparing for months in anticipation of the exams.

Many students expressed disappointment that their hard work would not be recognised and worried that their written exams may end up being marked harder to compensate for the additional marks.

However, many others said they were relieved that there was now greater clarity over the remainder of the exams for now.

Amy Murray, a Leaving Cert student from Co Kildare, said: “Initially, I was really, really annoyed. I got so annoyed and frustrated to the point that I started crying.”

Robyn Leahy from Limerick said she was disappointed that alternative options did not seem to have been explored.

“ I’ve worked hard for my Irish and French orals. I don’t see why there couldn’t have been an alternative like doing them by video chat or even predicted grades, based on work students have done so far.”

However, Longford student Luke Casserly said he felt relieved that there was more clarity.

“I think this is a really positive development, considering the circumstances we’re in. It’s not perfect, but there is no perfect solution here,” he said.