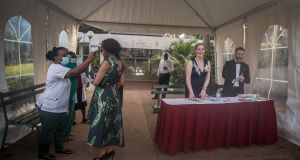 Temperatures are checked as people arrive at the St Patrick’s Day gala ball in the Sheraton Hotel in Kampala. Photograph: Sally Hayden

As European countries were cancelling their St Patrick’s Day celebrations, Uganda’s were in full swing.

Three days of events kicked off last week with a party in the residence of ambassador William Carlos, where guests were met with temperature checks, anti-bacterial spray and elbow bumps by a line of Irish embassy staff – both Irish and Ugandan.

No coronavirus cases had yet been confirmed in Uganda, and embassy staff said they consulted with the Ugandan ministry of health and the World Health Organisation about what guidelines to follow and whether to go ahead.

Peter Oumo, the Irish embassy’s MC for the night, promised that anyone who returns in 2021 will be rewarded with a “double greeting” to make up for the cold one this year. “I know it is a party and a celebratory mood, but if you can abstain from getting close and shaking hands for the sake of our health and goodness . . .”

The annual St Patrick’s Day celebrations are seen as a celebration of the ties between East Africa and Ireland. In a speech, Ugandan foreign minister Sam Kutesa said both countries have a history of fighting off foreign powers and struggling for independence. St Patrick’s Day “transcends borders and continents as an occasion that unites humanity”, he said.

“Irish people have made it to every corner of the globe,” Carlos added, looking at the diverse group of politicians, diplomats, businesspeople, and an assorted mix of Irish.

‘No one hold hands’

Five-time Irish dancing world champion Ronan Kelly and Gemma Holmes performed, as did a céilí band. “Everyone hold hands . . . No, no one hold hands,” said Holmes hurriedly, as she taught audience members the Siege of Ennis. Another dancer had to cancel her trip when it emerged she had been in Germany a few days before.

Uganda and Ireland have historic links. There is a free-visa arrangement between the countries and roughly 250 Irish people live permanently in the East African country of more than 40 million. Many Ugandans travel to Ireland to study and Irish Aid classifies Uganda as one of its nine partner countries.

Some of Uganda’s longer-term Irish regard the ambassador’s house as their second home, regardless of who is in the position. Irish flags were draped around a swimming pool while green lights lit up food stands. Offerings included Irish salmon, stew, black pudding and a hog roast, as well as Jameson whiskey sours and crates of Guinness. The night ended in the early hours with a rendition of the Fields of Athenry. (“The UK holds one party a year and kicks everyone out at 9.30pm,” one attendee told me, in contrast).

On Friday there was another party in Otters, a Kampala sports bar, this time organised by the Irish Society. At nearly 70 years old, it is one of the oldest societies in Uganda. The highlight was Carlos performing Lord of the Dance, much to the amusement of the professionals flown in for the week.

More than 300 people gathered in the capital’s Sheraton Hotel on Saturday for a gala ball. Tickets, at nearly €70 each, were out of reach for many Ugandans, but they sold out quickly.

In his speech, Adam Sweetman, the Irish Society’s acting president and a pig farmer, who has worked for agri-tech company Devenish for the past five years, toasted “the incredible country of Uganda and all the Ugandans that make it such an exceptional place to live”.

This time, Carlos quoted Brendan Behan, Oscar Wilde, and W B Yeats. “Sure aren’t we a fantastic nation,” he concluded.

Each table was named after famous Irish women: Marian Finucane, Edna O’Brien and Mary McAleesed. After the three-course meal there was a charity raffle (the top prize was a free flight to Dublin). Declan Peppard, who has lived in Uganda since 1993 and set up travel agency Simba Travelcare, won Person of the Year. Former winner Anne Merriman, a UCD graduate in her 80s who runs Hospice Africa, brought along staff and volunteers.

The events were a last hurrah for attendees. In a speech to the nation this week, Uganda’s president Yoweri Museveni banned mass gatherings – funerals, weddings, and parties.

“The next frontline of fighting the virus is to stop the merry-making – the discos, the dances, bars, sports, music shows, cinemas and concerts,” he said.

“These are very dangerous gathering points with the virus around. Drunkards sit close to one another. They speak with saliva coming out of their mouth. They are a danger to themselves. All these are suspended for a month.”