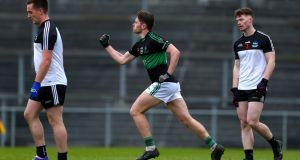 Nemo Rangers were forced to battle to the end by gutsy Newcastle West in the first round of the Munster club football championship in Mallow on Sunday.

A typical flowing move involving Luke Connolly and Paul Kerrigan led to the only goal from Ciaran Dalton three minutes into the second-half and it proved the difference.

Newcastle trailed by 1-7 to 0-4 after Stephen Cronin’s point shortly afterwards, but they took the game to the favourites with Iain Corbett and Sean Murphy landing important points.

They reduced the lead to 1-8 to 0-9 after 53 minutes and while Connolly kicked a ‘45 Nemo had to withstand late pressure in five minutes injury-time.

Nemo led by 0-6 to 0-4 at half-time following a niggling conclusion to the period with five players, three from the Cork champions, yellow carded during five minutes added-time.

They started well by scoring the opening four points inside 11 minutes before Newcastle West settled to become more of an attacking threat and claiming three on the trot.

Nemo went 13 minutes without adding to their tally until Connolly made it 0-5 to 0-3 in the 25th minute and wing-back Kevin O’Donovan bagged another moments later.

Three minutes into injury-time Corbett kicked a superb point from distance to leave the Limerick champions still in the hunt.

Rathgormack had to play with 14 men for the last quarter of normal time as Cathal Crouch was sent off for a second yellow card offence but they still managed to force extra-time with a late free by Jason Curry. Yet when they were restored to 15 players in extra-time, they were outscored by four points to one.

Miltown got the game’s opening score through Kieran Malone in the first minute with Rathgormack registering their first score in the fifth, a free by Jason Curry. The sides were level on three further occasions before the break until St Joseph’s Eoin Cleary grabbed the game’s only goal on 22 minutes.

Seanie Malone delivered a long ball out and found Cleary, who ran at the defence and struck home from close range to put his side 1-4 to 0-5 ahead. Rathgormack replied with a Curry point from play to leave the scores 1-4 to 0-6 at half-time.

There was little to spare between the sides in the second half and it was no real surprise when Curry landed a big free for the Waterford men in the 58th minute to send the game to extra-time on a scoreline of 1-7 to 0-10.

But Miltown kicked on and by half-time in extra-time led by 1-10 to 0-10. Eoin Cleary grabbed their first before Cormac Murray popped over two vital points. Kieran Malone and Jason Curry then added scores in the second half to give the hosts victory and a place in the semis against Clonmel Commercials.