Seán Moran: Limerick and Mayo get ready to uncork a vintage summer 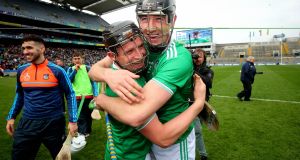 The hurling final showed that well handled, Limerick have the makings of a dynasty. Photograph: Ryan Byrne/Inpho 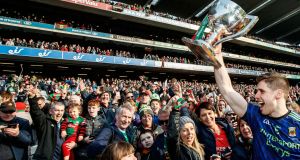 Mayo are entitled to be a bit miffed by reactions to their success, which veered between the patronising and the ribald. Photograph: James Crombie

I remember during a general election some years ago watching the church canvassers regrouping as the last of the Mass goers trooped in and getting ready to hurry off to another parish. Having grabbed sandwich boards and leaflets and hastened off to his car, one man wheezed and cried aloud, “caravanserai” – presumably, although it sounded more like “caravan sirree”.

Off they went, one job finished and dashing to another.

That’s the way it feels in relation to the national leagues over the past two months: squeezing in as many as you can but with no hope of catching them all despite running around all the venues you can cram into a few weekends.

Colm Keys from the Independent said on Sunday at Croke Park with two league finals being stuffed into the last day of March that the matches had no room to breathe.

It may have been more of a Black Hole of Calcutta reference than a wine-tasting metaphor, although Colm has form with wine.

During an international rules series in Australia, on a rare day off for sight-seeing the media found itself in McLaren Vale being shown around the Wirra Wirra winery.

Having stopped by the enormous fermentation tanks, the assembled reporters began to make merry about the prospect of falling into one of them and how the unfortunate victim – by this stage we had picked on legendary GAA PR guru Danny Lynch – would be discovered weeks later having bravely tried to drink his way to safety.

Colm began to riff on an official statement: “GAA president Seán McCague paid tribute, saying that it had been a tragic inevitability . . .”

The wine imagery will do fine. There we were – connoisseurs reduced to slurping away at a magnum of league finals, not having had time to uncork them one at a time and leave on the sideboard to improve.

The hurling final suffered more, probably because Limerick have established themselves as clearly the team to beat in the months ahead and there was a general and accurate consensus that they would have too much for Waterford. If the counties had had a week to themselves, as originally scheduled before the weather got involved, there would obviously have been more of a focus on the small-ball showpiece.

In the event the novelty value of Dublin being unavoidably absent from the football, added to the surprise, feel-good factor of underdogs Mayo winning a final and, in doing so, beating Kerry proved to be a winner with the public.

This doesn’t have to mean that the double bill of finals should be written off as a bad idea.

It was surprising to hear from Limerick that the concept of league finals in Croke Park was popular with many – given how rare it has become for the venue to be used for the fixture.

The argument put forward was that the league final is a national event and should be played in the GAA’s flagship stadium, which has been happening only about once a decade since the 1980s.

Back in the 1950s and ’60s, however, all but two league finals were staged in Croke Park.

The double bill is a separate argument but with the exception of the special 1916 centenary commemoration football final three years ago, which attracted a capacity crowd, the stadium would be well able to accommodate both.

Given hurling’s centre of gravity might Croke Park as a venue prove a deterrent to crowds? There wasn’t definitive evidence of that at the weekend. Whereas the 44,257 attendance was nearly 10,000 down on last year’s combined figures – including the camogie final, which was played with the hurling 12 months ago – there was no Dublin involvement.

Take the football crowd from the last year Dublin weren’t involved, 2012, and Sunday’s triple-header is actually nearly 5,000 up.

On the field the hurling final showed that well handled, Limerick have the makings of a dynasty whereas the football was a good outcome in whetting appetites for the coming summer.

We can probably assume that in organising a first league title for the county since 1997, manager John Kiely will avoid the fate of his predecessor of 22 years ago, Tom Ryan, who was unceremoniously fired in the aftermath (that year’s final was in October) for winning the wrong type of silverware.

Mayo are entitled to be a bit miffed by reactions to their success, which veered between the patronising – “bless them, getting excited about their league” – and the ribald – one acerbic correspondent suggesting in an email that the county had discovered the secret of winning finals in Croke Park: wear blue jerseys.

On that point maybe it was risky karma for Kerry to turn up in Croke Park wearing a black-and-tan outfit but you sense that having beaten them twice in a couple of weeks, Mayo will be happy to see that colour scheme later in the year should the teams meet again.

And the victory has seriously positive precedent. In James Horan’s first year back he has won the league. The only other managers to achieve that in the past 20 seasons are Jim Gavin, Jack O’Connor (including in 2009, as with Horan, the first year of a second stint) and Mickey Harte – ie the most successful managers of the modern era.

For years people have been telling Mayo to go and win the league and others have countered that they can’t; their training doesn’t permit it. Now they have.

The rest of us can hope for a vintage summer.