Seán Moran: Dublin have always had advantages so what's new? 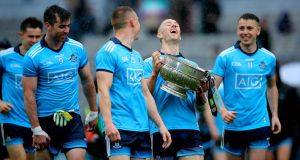 The biggest favour the GAA as an organisation did for Dublin is not the 11 per cent of games development funding disbursed to the county last year but a decision taken without fanfare 132 years ago. In 1887, the fledgling association inaugurated a national championship for football and hurling based on counties.

Its significance, according to official GAA historian Marcus de Búrca, “was not appreciated at the time”.

Not that the founding fathers can be excessively blamed, as Dublin wasn’t even the most populous county at the time – second to Cork, according to the most contemporary census, in 1891 – but by the turn of the century that had changed and the capital’s population has simply grown and grown ever since, even in the decades of mass emigration.

Population is one of the many advantages Dublin have enjoyed down through the years but not the only one. In the early days of the GAA players from elsewhere, who lived and worked in the city, played for their county of residence, not origin.

Many Dublin successes owed a great deal to that, peaking with the 1927 All-Ireland hurling victory, interrupting what would probably have been the game’s first four-in-a-row for Cork, who despite getting a record beating in a final, resumed winning ways in 1928 and ’29.

That Dublin team was based on the Garda club, who supplied nine starters and 14 panellists, and was essentially a galactico collective, featuring names such as Garrett Howard (Limerick and Tipperary), Pat ‘Fowler’ McInerney (Clare) and Tommy Gill (Galway).

This practice was subsequently – or consequently – addressed by the GAA altering the rules on declaration so that players could continue to play with their counties of origin.

Urban infrastructure also made running a county team easier with shorter distances and public transport and all of this is before the GAA hit its 50th birthday.

Developments since have nearly all benefited the county. The St Vincent’s driven “Dublin only” policy helped to create a real sense of identity within the city’s Gaelic games community and originated the phenomenon of the mass following the team can attract.

The advent of television brought the games to a wider urban audience that wasn’t traditionally associated with GAA and nowhere was this more significant than south Dublin, where the association has grown and prospered since the rise of Kevin Heffernan’s team nearly 50 years ago.

Permitting increased commercial activity has also been strongly to the advantage of bigger counties and especially Dublin, who have secured a number of blue-chip partnerships, including the current one with sports-sponsorship mega-brand AIG.

Championship reform with its provision of additional fixtures is a better method of determining the best team in a given year but it also removes the once in a blue moon shock that abruptly ended the prospects of contenders. It also benefits those counties with larger playing resources.

The late Eugene McGee observed about his famous 1982 All-Ireland win with Offaly that in those days with just three replacements and fewer matches, a manger could get by with a panel of 20 whereas nowadays, 30 would be needed.

This is because an increased number of matches means greater risk of injury and the evolution of playing rules now permits six replacements to be brought off the bench, including the potential necessity to replace an unruly player, who has been black carded.

Then there has been the historical availability of the national stadium, providing both a venue for big crowds and a saving in terms to having to develop one.

Seventeen years ago, the Strategic Review Committee issued its report and reaction to its recommendations were dominated by Dublin but not in the context of major grant aid. The SRC’s big idea was to split Dublin in two to take account of population growth.

Other recommendations included an increase in the number of clubs in the county in order to be able to promote games more effectively (11.11). There were also sections on games development, including one that aspired to 50 full-time coaches (at 11.6).

Whereas in the meantime the games development performance of the county has risen enormously with assistance from, initially the Irish Sports Council in the middle of the last decade and also the GAA, the proposed administrative restructuring has been quietly shelved.

From the GAA’s perspective there is no ambivalence about the impact of the development work in Dublin. The games are holding their own in the most competitive environment in the country and its main urban area and year after year Croke Park has made it clear that they have no wish to make radical alterations to the Dublin project but instead to try to roll it out elsewhere.

The impact of this on the senior inter-county championship is, bluntly, a secondary consideration unless there is a revenue meltdown and although last year’s football gates were down, they were offset by the rise in hurling figures.

It is an irony that had the GAA wanted to optimise its resources, by far the ideal situation is having Dublin as enthusiastic aspirants, like in the days of record crowds in the 2000s. Historic levels of success breed ennui.

This has proved to be the case with the most recent comparison, Kerry’s four-in-a-row teams of the 1970s-80s, whose winning margins in Munster between 1975 and ’82 average 13 points as opposed to Dublin’s 16 over the eight-year period in Leinster 2011-18. It’s likely that the reality would be even closer had Kerry the opportunity to play a third team in the provincial championships.

By the time of Kerry’s fourth-in-a-row All-Ireland in 1981, Croke Park wasn’t even full – as it clearly wasn’t for Dublin’s last autumn, either.

Kerry also dealt with the presence of a Cork team that drew with them twice over the period in question and in every one of those years was a top six team in the national league.

Dublin by contrast have spent half of the past eight seasons with no Leinster county in the top division and the other half with just five co-provincials for company over four years, four of whom were relegated at the end of the season. In other words this is not a vintage era in the province.

In answer to what the GAA “intend to do about it”, presumably they’ll do what they’ve always done in times of monopoly success; wait it out until someone new comes along.