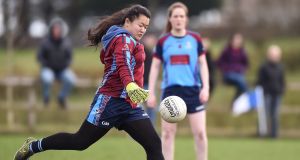 Rosa Kelly of GMIT during the Lagan Cup final between GMIT and University of Ulster Coleraine in March. Photograph: Matt Browne/Sportsfile

It was a few years back that a panel of judges was assembled by The Irish Times and tasked with choosing the “Best Place to Live in Ireland”. Making the shortlist of five, and topping the “Village” category, was Ardara in southwest Donegal.

She might be a touch biased, but it’s a judgment Rosa Kelly shares. With a passion.

“I’d love to come back home after college, I wouldn’t like to raise my kids anywhere else,” she smiles. “And I certainly wouldn’t want them playing for any other club.” The mere thought makes her shiver. She’s standing in Pearse Memorial Park, as breathtaking a setting for any club in Ireland, the ground framed by the hills of Donegal with the Atlantic rolling in from the west.

Its exposure to the elements did, however, prompt her to briefly retire from the game before she turned 11. “I said Dad, ‘I’m not going back’. He said, ‘that’s grand’. I never really got the concept of training in Irish weather,” she laughs.

But after a brief dalliance with soccer, Kelly returned to the GAA fold and apart from a short spell as an outfield player she has been Ardara’s goalkeeper ever since. “A few on my Mum’s side played Gaelic, my uncle was a really good player with Killybegs back in the day. But Dad’s more of a rugby person, he plays golf and he used to play tennis, badminton and squash – the posh sports. My cousin used to play cricket. I was like, ‘no thanks’.”

Since she came out of retirement, the club has been the centre of the 18-year-old’s world. “I couldn’t imagine life without football,” she says. And she’s proud to play for a club that, she says, is the “heartbeat” of the town. Ardara might have much to boast of, but there’s little that makes its people prouder than the fact that one of their own was the first from the county to lift Sam Maguire, Anthony Molloy the captain of Donegal when they won the 1992 All Ireland.

And it’s the likes of Kelly, in her first year studying Sport and Exercise Science at the Galway-Mayo Institute of Technology (GMIT), who are the heartbeat of the women’s game in the county which, on Sunday, will appear in its first ever Division One National League final when they take on Cork at Parnell Park.

The drop-off rate for girls playing sport remains dispiritingly high, Kelly having her own experience of its impact in Donegal. “My first big win with Ardara was the under-14 championship – aw, I can never forget that feeling, going through the town with the cup. But what I think is really sad is that 50 per cent or more of that team don’t play football any more. There’s always a shortage of girls – the senior [Ardara] team at the moment is about 50 per cent minors. You just have to rebuild all the time. Some get married, some have kids, some move away, a lot of girls just lose interest as they get older, life gets in the way. They prioritise life over football, the lads prioritise football over life. They build their lives around it. But I would always try to prioritise football too just because I love it so much.”

“Football is like therapy, I find it so helpful. If I have a problem or something is worrying me, once I step on that field everything’s gone. I just forget about it all for a while, it calms me down. The exercise helps too, especially for your mental health, it relieves the stress. I’d love to try and encourage younger ones to get involved in football, to make them aware of how good it can be for them and their lives. It’s great for making friends too, you have this bond with a team, you trust each other, rely on each other.”

“Once I’ve finished college I’m going to try and help out younger ones as much as possible. We should encourage senior players who have left to come back and help. It’s just so important to give back to the younger ones, to use our experience that way.”

And like most voices in the game, Kelly believes it is essential the women’s game merges under the GAA umbrella. “There’s still that barrier between men and women – they get more games, they get more gear, they get more support, we’re just kind of left. We are our own part of the club, there’s the ladies board and the men’s board, they don’t put us under the one. We have to pay more for registration, the men pay less because there’s just not that much money in ladies football. As a senior now I have to pay €51 – families with two or three girls, that’s a lot of money to fork out for football, especially if they’re struggling.”

“Progress is just generally very slow, we’ve been talking about these things for years. It’s 2017 and there’s still that gap. You even see it in professional sports. Look at the women’s national soccer team, having to change in toilets and share their gear. Look what they had to do to be heard. It seems like you have to name and shame people to get anywhere.”  “We have a centre of excellence in Convoy, the minors, under-21s and seniors train there, but we only can if the men’s teams aren’t training. So the Donegal women have had to petition to try and get another pitch. I think the people in charge don’t want to put money into women’s football, they think it might just fade away so there’s no point. There has been progress, yes, but there’s so far to go.”

And after seven years in the shirt, she’s no longer 'the Chinese goalkeeper', she’s Rosa Kelly from Ardara

On a personal level, though, it’s been a wonderful year. “I’m still on a high,” she says of GMIT’s Lagan Cup victory over the University of Ulster Coleraine back in March, her first national honour. That was one ambition ticked off the list, a place on the Donegal panel would be the ultimate joy. She’s had trials at underage level, made it to the last stage, but just missed out. “I would love to get on the county squad, but there are two really good ’keepers there now.” You’re not giving up, though? “No,” she smiles.

Nothing beats playing for Ardara, though. And after seven years in the shirt, she’s no longer “the Chinese goalkeeper”, she’s Rosa Kelly from Ardara.

“Yeah, in the early days there would have been some double-takes alright,” she laughs. “But I’ve played so many games now in Donegal, they’re kind of used to it. And in Ulster there’d be more of a population of different races, so I don’t think anyone is shocked by it now. It’s more diverse now.”

It was 18 years ago that the Ardara women’s senior team won its first trophy, the Donegal Division Two League title, the same year Kelly was born in Chongqing, a city with a population of more than 30 million, 5,000 miles and a world away from the place that became her home.

“For my whole life I thank my Granny, my Mum’s mother, who died a few years ago” she says of Bridie Kennedy, who lived in Killybegs but was a native of Portnoo.

“She saw an ad in the paper and said to my Mum and Dad ‘why wouldn’t you adopt? You’d be such good parents to a kid who might have no parents for some reason, give her or him a good life’. Then Mum went home to Dad and said ‘what would you think about a wee black-haired kid running about the house?’ Dad was like, ‘yeah’. So they went on the journey, sent their papers away. The process wasn’t as long back when they did it as it is now. But when they were taking me back we did get stuck, I had no passport obviously, but we got through and thankfully we got home.”   “People always ask me do I want to go back to China and I’d be ‘no’. ‘Even to visit?’ No. I did when I was younger, I wondered who my biological Mum and Dad are, but it doesn’t interest me now, I don’t really want to go. This is home, this is where I remember all my life, so I don’t really see myself leaving. I don’t know what the future will bring. I might, when I’m older, want to go back and try and retrace my steps, but at the moment I have no desire to. Ardara is home.