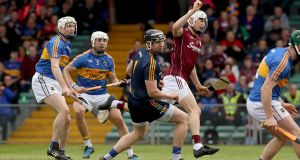 Life moves pretty fast if you’re a Tipperary hurler. Not two weeks ago, everyone seemed to be purring at the depth of their squad, the quality of their defence and the swashbuckling style of their forward line, an attack so good they couldn’t find a place for John O’Dwyer.

And after the league final?

Well Ger Loughnane might have put it most succinctly in his Star column the following morning – “not even a good team, not to mind a great one”, adding that they were “soft and complacent” for good measure.

There were plenty of people who celebrated the win for Galway as a sign that the All-Ireland championship this year wouldn’t be a procession for Tipperary. In reality, how many people really thought that the summer was a foregone conclusion?

We know what it’s like to go into a summer with a crippling sense of foreboding about what will happen next. Try 2008, for a start. The previous year Kilkenny had won their four games in the championship by a cumulative total of 56 points. They had put two titles back-to-back, and their main rivals for the previous five years, Cork, were going backwards. They ended up winning the All-Ireland final in 2008 by 23 points. Now THAT’S a foregone conclusion.

In fact, at the start of pretty much every year since 2006, you would have wanted a pretty compelling reason to bet against Kilkenny as likeliest All-Ireland winners at this stage of the year.

Retaining All-Irelands is difficult. The fact that Kilkenny did it so remorselessly for the last 15 years doesn’t disprove that

To say that after just one, albeit glorious, summer of hurling, we’ve reached that stage with Tipperary is foolhardy in the extreme, if for no other reason than historically Tipperary have struggled to retain the title. In fact, they haven’t done it since 1965.

And retaining All-Irelands is difficult. The fact that Kilkenny did it so remorselessly for the last 15 years doesn’t disprove that – it merely shows how good they were. That level of consistency isn’t normal, and while it might be the natural thing to do, it’s unfair to mark Tipp by that standard.

Having a bad day at the office is what happens to teams, not winning 11 All-Irelands in 16 years. The reaction of Loughnane and others is natural, but it’s an overreaction to what these Tipperary players have actually achieved.

There is, in many areas of the sports media, an urge to define a team or an individual as the king or queen, to start ‘eras’ on the back of six months of solid performance.

It’s seen most blatantly in the golf world, where in the last five years, we’ve variously been in the Rory Era, the Jason Day Era, the Jordan Spieth Era, and for the last three or four months, the Dustin Johnson Era.

What set Tiger apart from all those players currently vying for his mantle, was the ability he had to make any collection of world class golfers fear him

In a sport that was defined for a decade and a half by Tiger Woods, when the entire sport was sucked in by his gravitational pull, fans and media seem to have decided that that sport needs a kingpin. And of course, when judged up against Tiger Woods, all those guys suffer.

What set Tiger apart from all those players currently vying for his mantle, was the ability he had to make any collection of world class golfers fear him. No matter how far out of the running he was, two or three birdies on a Sunday was enough to spook the entire field. Kilkenny had that aura too, and maybe the Waterford drawn game last year was the last vestige of it.

But as of right now, Waterford, Clare, Galway, Kilkenny, Wexford . . . none of those teams would fear playing Tipperary. You can’t just assume Kilkenny’s place at the top table, and more importantly all the attendant privileges, on the back of one All-Ireland win in five years.

The reality is Tipperary remain favourites to win the All-Ireland, but the reality also is that Kilkenny drew with them in Thurles in March, and Galway did what they did in the league final. Tipperary are not yet at the stage where their reputation or their aura alone is worth a four- or five-point lead, as Kilkenny earned and then carefully cultivated throughout this century.

European football, and the Champions League in particular, is seen as the archetypal uneven playing field, where vast wealth is concentrated in the hands of a few superclubs, who get to the latter stages time and time again.

And yet Real Madrid are seeking to become the first team in 27 years to retain the title – no team has done it since the European Cup became the Champions League.

Heavy lies the head that wears the crown, a fact Tipperary are learning.