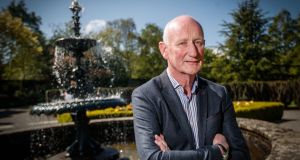 Brian Cody: “There are four or five teams who more or less on a regular basis could win the All-Ireland final.” Photograph: James Crombie/Inpho

If the main purpose of a championship launch is for managers and players to both talk up and talk down their prospects then Brian Cody might well have been in the wrong place. No problem. We did that for him.

Not only are Kilkenny no longer favourites for the Leinster hurling title (Galway are), they’ve dropped to third favourites for the All-Ireland (behind Tipperary and Galway). Some pundits have already declared his team not so much as in transition as in decline, and others have said Cody, now in his 19th season as Kilkenny manager, has stayed around too long.

“I didn’t know that,” says Cody, standing in the bright sunshine outside the Pearse Museum in Rathfarnham.

“I know nothing about odds either, to be honest. And never did. Look, Galway will be a team any year, and I’ve said this every year I suppose, but there are four or five teams who more or less on a regular basis could win the All-Ireland final and there’s another four or five who could beat any of those teams on a given day.

“It probably has changed this year to an extent, I would say there’s more teams capable this year of winning an All-Ireland final. I’d say definitely. I think it’s going to be the most competitive of all.

“Are Galway one of those? Absolutely. And were they before the league final. Most definitely. Regardless I don’t mind where we are in that table. How would I feel about it? I would as ever have a huge confidence in our players. There’s a terrific spirit there, things are always as they have been, a terrific attitude and a terrific spirit. And I would always have a great belief in the players that we have.

Cody’s overall championship record with Kilkenny now reads played 84, won 68, drawn six, and lost 10. He goes into the summer of 2017 without any survivors of Kilkenny’s four-in-a-row, 2006-09, but still with plenty of survivors from his 11th All-Ireland in 2015, and now looking to add to his unrivalled record which also includes 15 Leinster titles and eight National League crowns.

Everyone expects that opposition will be Wexford, presuming they get over their round-robin winners, yet Cody wasn’t talking up that prospect in any way.

“It would be disrespectful of me to suggest that it is (Wexford). But I would be certain that Wexford will be focusing on the game that they will be playing at the end of May and not on our match because that’s the way it works. But, regardless, we’re preparing ourselves to be as well prepared as well can be, that’s our challenge.

“The main challenger is the team you play first, that’s for certain. We certainly won’t look beyond that. But, I mean, Galway were challengers anyway, they had to be a fancied team anyway.

“You go back to last year’s All-Ireland semi-final, you can go back to any match you like over the past number of years, Galway to me will always be a top team and always have been a top team. Their league final display was excellent, obviously, so straight away people are suddenly zoning in on Galway again, and that’s understandable.

“What’s challenging more than anything else is the quality of the teams out there, is top class right now really. The reality of it is we were written off, we were beaten before, and it was supposed to be the end of all sorts of whatever it was... And now the same thing is there again.”

Which actually sounds like he’s talking up Kilkenny’s prospects in some way.