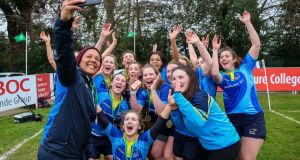 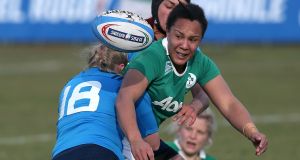 Sophie Spence during her comeback for Ireland against Italy in the Six Nations. Photograph: Giuseppe Fama/Inpho

Sophie Spence can’t remember bringing her opponent to the ground during a club game for Old Belvedere last September.

It was her last tackle of the game and after making the contact, she went into a daze.

Spence had previously been withdrawn from the game, having taken a slight knock.

But there were no adverse effects of the collision, meaning she could return to the pitch for the concluding minutes of the game.

After the second tackle produced a more worrying outcome, she was assessed by the club physio and later brought home by the coach and one of her teammates.

There began a rehabilitation course from concussion that would take four months to complete before she could resume playing rugby.

She suffered primarily from headaches and several aspects of her life were affected by the symptoms.

“I had about a six-week period where it was constant headaches,” she begins. “I was sleeping a lot. Concentration-wise, like driving distances, it wasn’t really happening.

“And then in work, loud noises and things wasn’t great for us, so I had to minimise work. Even when I’d lie down, I’d have pains in my head. I never felt sick but [loss of] concentration was a big thing.

“I go out to schools to give talks. It might be that 20 minutes I’m good talking and then that’s it, and there would be strain on the eyes and everything.”

After resting for a time Spence made her first attempt at the stipulated return-to-play protocols that gradually reintroduce concussed players back into the game of rugby.

The first attempt saw her reach stage one before symptoms returned and she was forced to take another break.

She made it through a few more stages the second time she tried it, before again regressing.

Another month of rest was required and she also went to see a neurologist.

It was a distressing time for the Ireland secondrow forward. Being disconnected from the team cut out a huge part of her everyday structure and the suddenness of it all made the adjustment all the more difficult.

Her body clock was still running on rugby time, and she occasionally found herself waking up for the early-morning training sessions that she couldn’t attend.

Extensive injury lay-offs were nothing new to Spence, having previously undergone three hand operations that kept her out of the game for a long period of time.

But with the autumn internationals fast approaching, along with the Six Nations and a World Cup in Ireland on the horizon, she was desperate to get the match time in.

“This was a bad one, it was a long one. We followed the correct procedures to see could I get back and it wasn’t happening, so I had to take more rest.

“It was just frustrating for me as a player, to train that hard for pre-season to go into the first ever autumn internationals at home and playing the very best teams.

“It was difficult to be away from that. And I think probably from my point of view I was stressing myself out a bit too much and wanted to get back, even though the coach ruled me out because I had to take the rest, and I’d been signed off by my neurologist.

“ I wasn’t coming back at that point, but I still put myself under a bit of pressure to go, ‘oh I’m gonna be alright.’

“I was resting, but in my head I probably wasn’t resting as much. I was thinking that I had to get right and I think that probably stressed me out a bit more. I was still thinking I could be back for the last game, even though I was signed off for the three.”

She eventually made peace with her situation at the start of November and allowed herself to relax before making another push at advancing her recovery.

Her patience was rewarded when she found some success with the return-to-play protocols in December.

She progressed to some light running and gym work coming into Christmas, before incorporating the contact element of the game in January without any setbacks.

Spence reflects how quickly the game can move on while a player is absent through injury.

“Any injury, whether it’s a break or whatever – not to be involved in that team environment, it’s kind of like when you retire, things will go on without you. Things will just adapt and change and you’re on the outside.

“The players were so supportive. The medical team were brilliant. I don’t know how many times I was on the phone to my mam every day.

“It would be about people listening and I suppose my talk wouldn’t have been positive at the time. I would have been down but I suppose it’s about those people trying to change your mindset to a positive mindset.”

Still working on her fitness levels, Spence wasn’t named in the Six Nations squad for Ireland’s opening game against Scotland.

She was recalled to the bench for the Italy fixture, where she was introduced at half-time. Naturally, she struggled to match the pace of the game.

“I remember coming on for the Italy game and I didn’t expect to get 40 minutes. I thought I was gonna get less than that, and then at half-time he [head coach Tom Tierney] made the change. God, it was a big shock to the system and other players got me through that.

“I know I was off the pace and that’s something that I’m very much aware of. I don’t want to be in that situation again.

“But again, that’s the team getting you through and playing as a 15 on the pitch. Communication is a massive thing to keep people going.”

Spence played out the rest of the Six Nations campaign, and picked up a minor knock to the hip against Wales that will have long cleared up before the Rugby World Cup begins in August.

Home support will be key for Ireland during that tournament, where Ireland face France, Australia and Japan in the pool stages.

Since all of their Six Nations matches were televised on RTÉ this year, Spence has noticed a shift in attitudes towards their game, which could lead to increased interest in their campaign.

“It’s funny, I had a lot of older men saying, ‘God, yer games were brilliant.’ That surprised me, for an older guy to come and say that. They say it’s like the old style of rugby that men used to play.

“It’s interesting because they like that it’s skilful and physical. But the support has been brilliant and the amount of people who actually tuned in to watch it, even if they haven’t been to any of the games, just to get that exposure out there is great. “You can turn on the TV and stick on RTÉ and have a look and see what the girls’ game is like.”

Her injuries have given Spence an insight into what retirement will be like, and she has started preparing for the future when playing rugby is no longer an option for her.

Having worked as a teacher for three years before moving to Ireland, Spence is utilising the skills of the profession to improve things for women’s rugby here.

After spotting a gap in the market, she decided to set up rugby camps for girls around the country last year.

The turnout was encouraging and she’s continuing the project again in 2017.

These camps allow young girls to see what they can achieve in rugby, while Spence can leave her imprint on the game.

“I’ve toyed around with, ‘when will I retire?’ and everything and I’m not getting any younger. You’ve got to think about the fact that I’m 30 now and you have to think about, ‘when do I look to have a mortgage?’ and if you want a family. That’s reality for you and your career is a massive thing.”

“Like my camps, tapping into things that I enjoy in terms of coaching and engaging with youth and looking to the future of what I can leave, not just on the pitch but as a legacy to create a better outlook for Irish rugby as well.”