Sonia O’Sullivan: For the record, I welcome new proposals 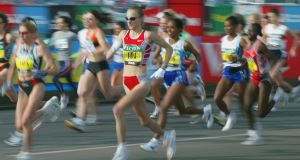 Paula Radcliffe starting the London Marathon of 2003 in which she set her world record time of 2:15:25. Photograph: Christopher Lee/Getty Images

Athletics has always been a sport measured by the numbers. If not your time or distance, then certainly your position. When people start to question some of these numbers, and the very parameters that define the sport, it gets harder to define what is real and what is not.

The proposal to reset all athletics records pre-2005 has generated a lot of discussion in recent days. But something has to be done to restore the credibility of athletics to the general public.

This proposal, announced on Monday by a European athletics project team led by Pierce O’Callaghan, has been forwarded to the IAAF, the governing body of world athletics, to approve and put into action.

I believe this will eventually be a step forward for athletics, if the records are properly reset, and a new list is built up aligning with the proposed criteria

The proposal is not supported by everyone – and particularly not by athletes who still hold long-standing records.

These records are now likely to be set aside in favour of a new list of records that can be only approved as long as the newer and stricter drug-testing criteria are met; these include the testing of the athlete in the months leading up to the record, after the record is set, and also the meeting venue being on an approved venue list.

I believe this will eventually be a step forward for athletics, if the records are properly reset, and a new list is built up aligning with the proposed criteria.

However, I don’t believe it is possible to completely erase the current records. Not every athlete who holds a record will feel like they can let go until they are broken on the track or field or road.

Every athlete knows in their heart how they achieved their records, and this doesn’t change a thing in each individual’s mind.

Athletes do not own records. They don’t get paid royalties for the amount of time they hold a record. So no matter what new list is created, the times run before this new list is started are still there, on the all-time list, and that will never go away.

Initially my reaction when I heard rumblings of these changes was to reject the idea of putting aside all current records. Then when I took time to read through the proposal, the wording makes it more acceptable to embrace change, and to see the positives.

If you look through the current world record holders, go through the list name by name, you find yourself judging each record. There are certainly a number that will raise eyebrows, but equally as many that you look at in awe.

These are often records that you can recall where you were when you watched them and how impressed you were by the performance. This is a huge part of athletics history that simply cannot be erased.

I remember watching when Paula Radcliffe ran 2:15:25 at the London Marathon. I was recovering from injury at the time in 2003, and was in my garage in London working hard on the Nordic ski machine, glad of the live coverage on TV.

It seemed for a long time that Paula’s marathon record would last forever but athletes are getting closer now. This is one of the records that you would like to keep out there as the ultimate target for women’s marathon running.

The London marathon is a fully accredited event, and I’m sure Paula went through all required doping procedures at the time. The only thing missing is the ability to recheck these samples

Many people will have their favourite records on the list that they would like to see stay as the target for athletes to aim for, but still some just seem so far out of reach.

Last year we saw the women’s 10,000m record, which had been held by China’s Wang Junxia since 1993, easily broken by Ethiopia’s Almaz Ayana at the Rio Olympics, yet that still raised some eyebrows throughout the athletics fraternity too, even though it would have met all the new criteria for approval.

I don’t believe the objective of this proposal is to erase history, but to rewrite the rules and the criteria required to have a record ratified.

There are many athletes – and I would include myself in that list – who can look back on some of the best performances of their careers and tick off the boxes.

Approved venue meeting all criteria can easily be retroactively checked; there is an IAAF technical delegate who makes a report at all approved athletics meetings, drug control has always been a requirement to have a record ratified.

How can you deny a talented unknown athlete the chance to get on the world list?

Under the suggested proposal, when I look back at the records I set, my World Indoor 5,000m record, set in 1991, would not have been ratified as there was no regular out-of-competition testing for athletes who were competing in college, just making a breakthrough.

This is something that will need to be addressed, as junior athletes can make a breakthrough performance before they are even registered in a regular testing pool. How can you deny a talented unknown athlete the chance to get on the world list? So it becomes a debate on what comes first – the testing or the athlete’s performance?

I’m not so sure about drawing the line in pre-2005, either: how can we be so sure that all records set post 2005 are clean and eligible?

There is so much to discuss and debate because a lot of athletes are affected. It will not be possible to please everybody, and some hard decisions still need to be taken about where and when to exactly draw the line.

There are other issues as well: my outdoor world record of 5:25.36 for 2,000m, set in Edinburgh back in 1994, was bettered indoors earlier this year, when Genzebe Dibaba from Ethiopia ran 5:23.75, and that’s now considered the world record, even though indoor conditions are different to outdoors.

Granted it was probably one of the least windy days ever at the Meadowbank Stadium, when I ran there in 1994. But it was definitely not a controlled environment that athletes experience when competing indoors.

Also if you look at the footage of Dibaba’s record set earlier this year in Sabadel, Spain I’m not sure the venue or the event would meet the criteria required as an accredited venue for record purposes. So how can this be let stand if it doesn’t meet all the proposed criteria required for record-setting purposes? If the decision is going to be black or white then all the grey areas need to be addressed.

If this proposal is accepted by the IAAF, then it should come into effect immediately. No athlete should be accepted onto the new list before it is set up, and if we are starting over again, then we should start on the date that the line is drawn across the old records and new records recorded.

I’ve spent many hours immersed in the Athletics Yearbooks, particularly before we could so easily search these things online. It is definitely time for a change, and anyone that is familiar with Peter Matthews’ International Athletics Track and Field annual will understand how things could look in the future.

This has always been the bible for athletics statisticians, only maybe now we will have an Old Testament and New Testament.

Either way it feels like a new dawn is emerging in athletics records, but at the same time we must not forget the head-to-head competitive racing, where fast times are merely just a bonus.