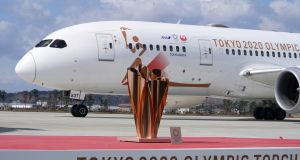 Global Athlete are the latest group calling for the 2020 Tokyo Olympics to be postponed. Photograph: Eugene Hoshiko/AP

Pressure and demand to postpone the 2020 Olympics is fast increasing from all sides after the Global Athlete group became the latest to warn that “public health must be a priority over sporting events.”

Irish karate champion Caradh O’Donovan is part of the start-up group who founded Global Athlete, the international athlete-led group aimed at collectively addressing the balance of power between athletes and administrators.

In a statement released on Sunday, the group is calling on both the International Olympic Committee (IOC) and International Paralympic Committee (IPC) to postpone the Tokyo Olympics until the coronavirus pandemic is under control, saying they have heard from hundreds of athletes who believe it is now necessary to “to place athlete safety and welfare first”.

With a range of Tokyo Olympic hopefuls part of Global Athlete, they are also calling on broadcasters, specifically NBC, and sponsors “to adopt the same level of duty of care toward athletes by supporting the IOC and IPC with flexibility and understanding during these uncharted times.”

It’s unclear how much longer the IOC and IPC can hold out, the Summer Games still set to open in Tokyo on July 24th, now just 123 days away, the 2020 Paralympics also still set to open in Tokyo on August 25th. There were reports on Sunday that the organisers of Tokyo 2020 have begun drafting alternatives to holding the Games this summer, but are unlikely to make those plans public until the end of March.

O’Donovan, a member of the Irish karate team with Tokyo ambitions, and a former world champion in kickboxing, said she would be “absolutely stunned” if the Olympics do go ahead in July as scheduled.

“My dream is to go to the Olympics this year,” she said, “but it’s an impossible task from my perspective and it’s the same for a huge number of athletes.

“I’d be absolutely stunned if they go on in July, as planned. It’s bizarre the IOC hasn’t shown any real leadership. They’re acting as though it’s business as usual and it just seems very strange.”

The Global Athlete statement also added: “As the world unites to limit the spread of Covid-19 virus, the IOC and IPC must do the same. Public health must be a priority over sporting event.

“Sport has a duty of care to protect their athletes. By asking them to carry on as normal and continue to train for these Games, clearly puts their physical and mental health at risk.

“Athletes want to be part of a solution to ensure the Games are a success. But under the current global restrictions that are limiting public gatherings as well as closing training facilities and borders, athletes do not have the ability to appropriately prepare for these Games, and their health and safety must come first.

“We all recognise the Games provided a unique ability to bring together countries and unite a divided world. That is why waiting is so important. With meaningful collective athlete engagement, a future Games could act as a celebration showcasing that we all did our part in overcoming the Covid-19 pandemic.”

The Global Athlete stance came a day after USA Track and Field, the governing body of American athletics called for a postponement of the Tokyo Olympics. The federation, in a letter to United States Olympic and Paralympic committee (USOPC) chief executive Sarah Hirshland, asked the IOC to postpone the Games.

“We certainly understand the ramifications of this request, and the realities of trying to coordinate the logistics of a postponed Olympic Games around the schedules of other athletes, sport federations, key stakeholders etc, but the alternative of moving forward in light of the current global situation would not be in the best interest of our athletes (as difficult as that decision might be),” USATF chief executive Max Siegel said in the letter. “The right and responsible thing to do is prioritise everyone’s health and safety, and appropriately recognise the toll this difficult situation has, and continues to take, on our athletes and their Olympic Games preparations.”

USA Swimming had already asked the USOPC to push for a one-year postponement as the impact of the lockdown began to hit home.

The Brazilian Olympic Committee (COB) is also the latest to show some leadership in the issue, proposing the Games are held on the same dates in 2021.

1 Gerry Thornley: Home and away Six Nations could be its ruination
2 Aviva 10-year ticket holders seek clarity over payment
3 Eddie Dunbar stays in saddle as he eyes return to grand stage
4 Coming fourth in the Olympics didn’t change this fearless quartet, time did
5 Rory McIlroy believes Ryder Cup will be postponed
Real news has value SUBSCRIBE