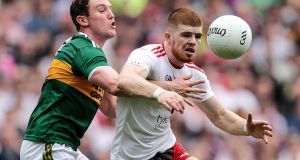 Cathal McShane may opt to sign for Adelaide in the AFL. Photo: Laszlo Geczo/Inpho

Tyrone’s Cathal McShane will not be available to play for the Red Hands this year if he opts to sign with AFL club Adelaide.

Tadhg Kennelly gave Tyrone fans hope when he said on OTB AM this week that McShane would be ineligible to play at first-team or reserve level in Australia unless recruited in the mid-season draft, which would be unlikely.

Kennelly, who won an AFL Premiership with Sydney before adding an All-Ireland with Kerry, is now an assistant coach with the Swans, but is clearly unaware of a rule change that means that McShane can be signed as a Category B rookie and placed on a list for 2020.

Each club is permitted to recruit up to three Category B rookies that can be signed on directly, rather than through the draft system. Category B refers to players from non-traditional recruiting backgrounds, including international players.

Rule 10.5 states that a Category B Rookie can be included on a rookie list up to June 30th, provided that a club has a vacancy. He can play in the Premiership to replace a player with a long-term injury if signed on a 2020 standard playing contract prior to that same date.

McShane is due to participate in training with Adelaide and the Crows have a free slot on their rookies list.

Adelaide’s scouts made contact with McShane after being impressed by his breakout campaign in 2019, which ended with an All-Star.

The 24-year-old actually trialled at the AFL Draft Combine in 2014 but was not picked up and failed to make any impact on home turf until last year, when his strength and accurate shooting propelled Tyrone to an All-Ireland semi-final.

While most of the 17 Irish players currently on the books of AFL clubs are of the counter-attacking half-back mould, McShane has been earmarked for a potential key centre-forward role.