Mullinalaghta in dreamland as they prepare for Leinster final test 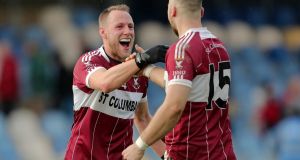 The last thing Mickey Graham expected was this – a record-breaking run in the AIB club football championship just as he’s about to dip his toes into senior management for the first time.

When Graham was unveiled as new Cavan manager last August, to succeed Mattie McGleenan, two things stood atop his CV: a former standout player with his own county Cavan, and the man who had guided the tiny club St Columba’s, Mullinalaghta to back-to-back county football titles in Longford.

Before that Mullinalaghta hadn’t won a Longford football title in 66 years, and after guiding them to third successive title this year, Graham has now landed them in the Leinster final – the first Longford club in the 49-year history of the competition to make it that far.

Part of the surprise is the ease with which they did it, beating one-time provincial champions Éire Óg from Carlow in Sunday’s semi-final, 2-15 to 0-3, to set up a final showdown against south Dublin giants Kilmacud Crokes – the four-time Leinster champions, and two-time All-Ireland winners.

Describing them as “only a half-parish” – on the border with Cavan in the north of the county, population roughly 400 – Graham is now taking Mullinalaghta into the classic David versus Goliath contest, Kilmacud boasting a club membership about 10 times greater that their opponents’ population.

They also go against the increasing sense of elitism in the club championship, seen elsewhere on Sunday as reigning All-Ireland championships Corofin, fresh from winning a sixth successive Galway title, won a third successive Connacht title, and fourth in five years, beating Ballintubber. And likewise Kerry champions Dr Crokes, who in their seventh Munster final of the decade and third in succession, took out Clare champions Miltown Malbay on Sunday, completing a fifth title win this decade.

After narrowly getting past Portlaoise in their semi-final on Sunday, Kilmacud joint-manager Jonny Magee insisted he wouldn’t be taking Mullinalaghta for granted in any way – the final now confirmed for O’Connor Park in Tullamore on Sunday week, December 9th, with a 1.30 throw-in.

“We’re under no illusion, the final is a huge step up for us,” Graham agreed afterwards. “And especially we’re the smallest team in Longford as well – we’re only a half-parish. So, what they’re after doing, to win a county final even... but just to do this is fairytale stuff.

“We have the same panel of players for the past three years and it’s a testament to them. You think after being three years on the road, tiredness and the hunger might fade and at times in the Longford championship that question was posed. Yet here we are, in a Leinster final.”