Corofin and Dr Crokes have the edge to seal provincial titles 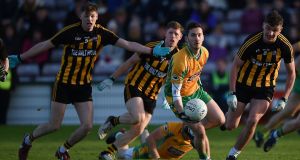 Corofin are favoured to defeat Ballintubber in the Connacht SFC by the expected return of new All Star Ian Burke (above) as well as his cousin Daithí. Photograph: Inpho

Ballintubber (Mayo) v Corofin (Galway), MacHale Park, Castlebar, 2.0 (Live, TG4)
The All-Ireland champions will be hopeful that they have got the glitches out of their system in the county championship and that the shellacking of Clann na nGael represents their current form. As such a strong attacking force, Corofin frequently have to cope with defensive systems and this won’t be much different. They are favoured by the expected return of new All Star Ian Burke as well as his cousin Daithi, back from spreading his wing with the county hurlers in Sydney.

Ballintubber trade heavily on their experience and the big-game instincts of the O’Connors and Alan Dillon but they are likely to be without promising teenager attacker Stephen O’Malley, who is battling an injury. The Mayo champions were easy winners against Aughawillan in the semi-final but before that laboured to get past Tourlestrane and will have their work cut out to put away the champions.

St Columba’s Mullinalaghta (Longford) v Éire Óg (Carlow), Pearse Park, 1.30
An excellent chance for Mullinalaghta to make history by becoming the first Longford club to make the provincial final against one of the standard bearers for smaller counties, Carlow’s Éire Óg, twice All-Ireland finalists and five-times Leinster champions – all from the 1990s. These days Mullinalaghta are more impressive and survived a determined comeback against the same opponents last year. Éire Óg are probably improved on that – eg Simon Rea is back - but it’s unlikely to bridge the gap.

Kilmacud Crokes (Dublin) v Portlaoise (Laois), Parnell Park, 2.0 (Deferred, TG4)
Contrasting paths to this semi-final with the Dublin champions breezing through Dunboyne whereas Portlaoise had to scrap hard to dethrone champions Moorefield. It was however a deserved win even if they rode their luck - their opponents switched goalkeepers at half-time and there was an uncomfortably close penalty shout at the end – and their mobility around the middle gave them a grip on the match that proved impossible to remove.

This will be different though because Crokes are mobile and have a high quality of player to go with the obvious stardust of county men Cian O’Sullivan and Paul Mannion. In particular their defence with the McGowans, Andrew and Ross, Cian O’Connor and Cillian O’Shea is taken to curb the Portlaoise attack and even allowing for Gareth Dillon’s excellence, Crokes are packing too much up front.

St Joseph’s gave a great account of themselves in upsetting the Nire in the semi-final with county hurler Conor Cleary doing well at centrefield and his brother Eoin up front. This looks too much of a step up even for a side which has had an impressive season and operates an effective sweeper defence with Brian Curtin dropping back.

The Kerry champions are laden with talent and the scoring returns of Tony Brosnan are attracting publicity suggesting he wouldn’t be out of place in the Kerry full-forward line with Paul Geaney and David Clifford. With Colm Cooper kept in reserve on the bench, the scale of the challenge for the Clare champions is obvious.