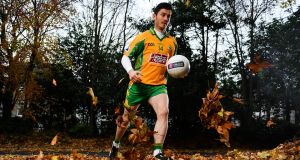 Ian Burke: “We’re just trying to grind out results and if we can do that playing swashbuckling stuff or with a good battle we don’t really mind” Photograph: Sam Barnes/Sportsfile

Ian Burke is a hard target for any shots at elitism or the soft killing of some club football matches. Just because Corofin are still tearing up all in front of them doesn’t mean it’s always going to be that way.

Modest, polite and still boyish in looks and stature, it helps that Burke’s own killer instincts are also well concealed, even behind his recent football All Star. But there’s no denying Corofin’s ominous status going into Sunday’s AIB Connacht football final.

After winning a sixth successive Galway title, they took out Roscommon champions Clann na nGael – still the most successful club in Connacht – with a 27-point semi-final victory. The reigning All-Ireland champions are now chasing a third successive provincial title, and fourth in five years.

Standing in their way are Mayo champions Ballintubber, seeking their first.

Burke missed the semi-final with a rib injury, but will be fit for Sunday and despite the favourites tag he has good reason to disregard any notion of elitism.

Though still only 25, he was on the Corofin side that last lost a game in Galway, to Tuam in 2012, and also points to this year’s final against Mountbellew-Moylough – which Corofin only won after a replay.

“The club’s a funny one, it comes in cycles,” says Burke, who in winning Galway’s first football All Star since 2003, at corner forward, and only 24th in all, neatly traced the trail back to current manager Kevin Walsh, who won three at midfield.

“We’re very lucky and privileged at the moment with Corofin, and we’re very aware of that. Where we are, it’s hard to stay at that level consistently. We’re enjoying it . . taking every game as it comes . . . you can look back in years to come and see what you’ve done. At the moment we’re just focussed on Ballintubber.”

“I know a lot of the younger lads would probably never have lost a game in Galway. But I can remember my dad playing with Corofin, he went years without winning a county title, for a lot of years. So he doesn’t be long telling me that the good years mightn’t last forever.

“Against Clann na Gael, we got a couple of scores early in the game, and that maybe killed it as a contest. And we were very lucky against Mountbellew the first day, I think Micheál Lundy got the point at the end, it was a fair testament to the lads that they were able to dig deep in play and adapt to systems as they come up against them. I think it’s a good sign of a team to be able to adapt in the game. We knew what Mountbellew would bring and we were kind of lucky to get the draw the first day.”

“We’re only focused on the next team that we play, there will be bad performances and that’s the nature of the game. But it’s a results business and we’re just trying to grind out results and if we can do that playing swashbuckling stuff or with a good battle we don’t really mind. We’re just happy to still be involved and happy to still be there.”

Still, there has been some soft killing in the other provinces too. On the day same day as Corofin’s 27-point win, Kerry champions Dr Crokes put 5-20 past St Finbarr’s from Cork, all from play, in their Munster semi-final – booking their 10th provincial final appearance, the seventh of the decade and third in succession. They represent an equally foreboding presence for Clare champions Miltown Malbay on Sunday.

That same day saw Dublin champions Kilmacud Crokes emerge 16-point winners over Meath champions Dunboyne in the Leinster club football quarter-final, although they should face a proper test against Portlaoise in Sunday’s semi-final.

For Burke, size and stature has certainly had no bearing on his football ability. A cousin of Galway hurler Daithí Burke, who this year won a fourth successive All Star and who will also feature on Sunday for Corofin, any further talk of elitism with Corofin is promptly put into context by the county scene.

Galway football still has some way to go to close the gap on Dublin, nine-point winners in this year’s All-Ireland semi-final.

“We could have been in a better position at half-time with something more and better to build on rather than chasing the game in the second half a bit. We’re just looking to get to a stage where we’re competing for 70 minutes consistently throughout a game. I think we’re not too far off that. Last year was a good year for us and we’re just hoping to build on it.”

Liverpool back to winning ways; Gordon Elliott apologises for controversial photo 07:24
GAA congress signals greater involvement of women in organisation 07:00
The sports fan would like to wake up now, thanks very much 06:00
Six Nations: Will Connors sets the backrow benchmark in Rome 06:00
Ken Early: Referees and VAR now thrust to centre stage 06:00
Crossword Get access to over 6,000 interactive crosswords