Philip Mahony: Winning Munster title was the best feeling ever 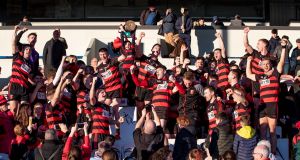 Regardless of how the All-Ireland campaign unfolds for Waterford’s Ballygunner in the months ahead, Philip Mahony will always be associated with what is already a great season for the club.

His goal in the dying seconds of the Munster semi-final took the match against Clare’s Ballyea to extra time and ultimately facilitated the hardest-won of victories.

Without the decisive touch he got on Conor Power’s desperately speculative ball across the goal, Ballygunner would this week have been processing further regret about a provincial campaign rather than celebrating what is only the club’s second title despite a record 10 final appearances.

Club manager and former player Fergal Hartley says: “There’s defining moments and absolutely, that’s a defining moment and we’ll be looking back at that moment, that goal, that leadership that Philip Mahony provided. We’ll be looking back at that for – I suppose, forever, because we only have two Munster Championships and every puck and every ball is remembered. I suppose you could argue that’s the puck of the ball that won us the Munster Championship in the end.”

Mahony says that the impact of the score only began to register in the aftermath of the unexpected and emphatic defeat of defending champions Na Piarsaigh at the weekend.

“At the time it wasn’t really [a huge moment] because we knew we had the final. Now I can look back at it and say it was great. I remember in 2001, I remember exactly where I was standing and looking up at Billy lift the cup. To fast forward 17 years and to look up and have the cup there again and back to Ballygunner that night is just something I’ll never forget.”

The club has evolved into the dominant force and has just completed a five-in-a-row in the county. Originally a small village on the outskirts of Waterford, it has seen the city expand out to meet it and is now formidably resourced.

Mahony and his younger brother Pauric, the team’s high-scoring forward, are both established members of the Waterford team and won All-Ireland schools honours 10 years ago with De La Salle, a team Philip co-captained with Noel Connors having also played on the team that won the year before in 2007.

The brothers again combined in a breakthrough Munster minor winning side – only the county’s third – in 2009 and also in UCC’s Fitzgibbon winning campaign in 2012.

For all the under-age success – his cohort was the club’s most successful coming up through the age grades – Philip Mahony makes it clear that winning the provincial club title has remained an almost obsessive pursuit, as year after year they won Waterford and kept coming back for what on Sunday was a third final in four years.

“In the last five years we came back every year and we worked harder and harder, even when we thought we couldn’t work any harder. We managed to try and eke out another 1 or 2 per cent, and we got over the line; it’s the best feeling I’ve ever had in my life anyway. It really is. Without a shadow of a doubt, it’s the best feeling ever.”

He is a top-class defender, frequently used in a sweeping role for the club – and, occasionally in Tadhg de Búrca’s absence for the county – and was nominated for an All Star at wing back in 2016.

The Mahonys are also representative of what makes the club competition so special. A third brother, Mikey, is on the panel and they are all nephews of former county hurler Shane O’Sullivan, who is joint-captain of the club.

That closeness has helped when the chips are down as they were in the Munster campaign with a close-run quarter-final against Midleton preceding the Ballyea epic. On Sunday, Na Piarsaigh had galloped into a five-point lead within the first 10 minutes.

“I think in the last number of games especially we’ve been down a lot,” says Mahony, “and we managed to show the resolve to come back and never give in. The last game against Ballyea was crazy, and I don’t know what it was.

“Just during this week talking to the lads I had a real feeling we were going to do it this week. I can’t describe how or why that was, but I thank God we did it. If we never won Munster, it would have stuck with me ‘til the day I die. If you knew how much we thought about winning this, you would say it’s not normal and not healthy.”