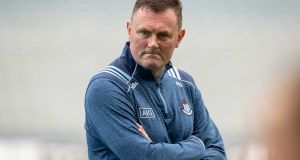 Dublin manager Mick Bohan: “We should start off with the same dreams as a parent for your son as your daughter.” Photograph: Morgan Treacy/Inpho

In front of another record attendance of 56,114, for the seventh successive year, Dublin marked their third successive All-Ireland title with a gritty, hard-fought victory over Galway. In the headlines, at least, it appears women’s Gaelic football is in rude health, only Mick Bohan is here to tell us that isn’t necessarily so – and he should know.

After three winning seasons as Dublin manager, and back on board for 2020, Bohan admits the women’s game has come a long way, only with quite a bit to go, starting with those attendance figures.

“The first thing I’ll say is I’m actually getting tired of this record crowd number, that’s begun to grate on me,” he says. “Because it’s one day. The whole success in this is that this becomes part of our culture. My sport is Gaelic games, it doesn’t really matter to me whether it’s a male or a female. I’ve been lucky enough to be involved with both and thoroughly enjoyed my time with both groups.

“But 95 per cent of the time, these girls play in front of empty stadiums. As we’ve said to our group right from the start, there’s an onus of responsibility on them to produce a spectacle that people come to watch, that they enjoy. The All-Ireland final didn’t produce that, we were very aware of that, and that would have been a sense of disappointment for us (Dublin won 2-3 to 0-4 on wet day), in spite of the fact we were successful. We didn’t set our stall out on winning All-Irelands, we set our stall out on playing the game at a level that it hadn’t been played at before.

“That’s not said in any form of arrogance whatsoever. We needed to set something different when we came along, so that’s what we went after – a high skill-set to bring the game to a level that people would enjoy watching it. So we’ve taken that responsibility on ourselves.

“But here comes the crux. We didn’t have a lot of top-level games over the summer – and that’s a different story. The best game I thought we were involved in was the Cork game. Luckily this year that game was in Croke Park, so people got to see it. But they know they only get one or two shots at it. If it was the lads they would have been at least five or six times over the summer where their matches were shown live on TV.”

Speaking as an ambassador for the 20x20 Call To Action campaign, which is looking to get women athletes in Ireland to post videos of their skills online using #CantSeeCantBe to help make their sporting skills more visible, Behan sees other issues stalling the progress of the women’s game, including a reluctance between the GAA, the women’s Gaelic football association, and Camogie Association to properly combine their interests.

“My feeling is it’ll never be a full success until that happens. It’s a little bit like, at the moment in our game, there’s still a provincial system and we don’t even have any teams in our province this year and we’re still involved in a provincial system. Why is that? Why don’t they just go with an open draw?

“Is it because it’s the right thing for the game or because people don’t want to let go of their positions? And I think I’d be very clear on the answer to that. I think equally the same situation exists between camogie, LGFA and the GAA. What’s the right thing to happen? Without a doubt, to go under the one umbrella.”

What Bohan is not so worried about is the fact two of his star players, Sinéad Goldrick and Niamh McEvoy, have signed Australian Football League Women’s club Melbourne FC for next season.

“The first thing I’d say is that I’d prefer that they weren’t in Australia. We’re obviously lucky enough that they’re going to be coming back in time for us but going down the line, if it was to take place on a bigger scale then obviously it would have a massive effect. At the moment, Australia football is in its infancy.

“They (our players) are literally being prepared so it is a really dangerous time. But I genuinely think it will level off.”

As a PE teacher at St Mark’s Community School for the last 29 years, Bohan also sees the need for the wider embrace of younger women in sport: “More and more, as the years have gone, teenage girls are opting out of activities at 16, 17 years of age, more so than their male counterparts. Parents will write notes for a girl much quicker than for a fella. Why? Because she’s a girl. If you break the norm, the same as you pack the car to see your daughter play as much as your son, you change the cycle.

“We should start off with the same dreams as a parent for your son as your daughter. I’m sure there was a long period of my career where I didn’t approach a girl’s team the same as a fella’s team, but I do now.”

Mick Bohan on Dublin senior football manager Jim Gavin (who he worked with at under-21 level) returning for the quest of a six-in-a-row: “I’d say he felt under pressure from his group that without doubt. If you look at it, the key man, Stephen Cluxton wouldn’t have stayed if Jim had gone. I don’t know how many more would have been in the same boat.

“But his appetite to go back to the well again is incredible. I would have said, ‘What has he got to achieve now?’ Where do you go then? It’s nearly like you’ve reached the ceiling, what do you do next? Unless the same thing exists in their culture, which is just to play the game at the highest level that it can possibly be played for as long as we can.

“They’ve been remarkable and are huge ambassadors for the game. I actually think that when, and the day will come, I don’t know when, they are beaten, we’ll all look back and thank them for driving the game and the standards of the game to a remarkable level.”

1 Tin Cup: A box office hit that played its way into part of golfing fabric