Doyle and St Mullins eventually get opportunity to celebrate 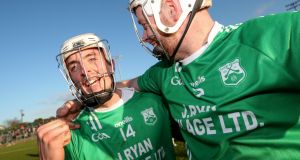 For James Doyle and his St Mullins team-mates, there was one major difference between the Leinster quarter-final defeat of 2017 and ’18 All-Ireland hurling champions, Cuala and Sunday’s semi-final win over Rathdowney-Errill.

The previous match had ended in a welter of apprehension after team selector Micheál Ryan had taken ill so there was a subdued air on the field after the full-time whistle.

Now out of danger and being treated in a Dublin hospital, Ryan was able to talk to the team at half-time on Sunday and has a Leinster final against current All-Ireland champions, Ballyhale to look forward to at the end of the month. So this time the post-match mood was a lot different.

“Oh, without a doubt,” said man of the match Doyle. “You could see it – 20 minutes or half an hour after the game what it means to everyone and what it means to Micheál Ryan. Like I said before, this is all for him. He’ll be a proud man.”

It was a measure of the player’s impact on his club’s progress on Sunday to a first Leinster club hurling final that he managed to move the focus away from the team’s perpetual rain-maker and captain, Marty Kavanagh, who nonetheless managed 1-9, 1-1 from play.

Doyle, who is also a key player for Carlow, had started on the full-forward line where his aerial prowess proved a menace for the Laois champions from the start but because of problems at centrefield, a switch was made out to the middle where he exerted a major influence and with the match on the line in injury-time, scored the two points – in a five-point haul – that secured a one-point win.

The first came after a great catch and the second was the culmination of an extraordinary run at the Rathdowney defence, including a flick over the head of the covering Laois centre back and All Star nominee, Jack Kelly.

“To be honest,” said Doyle, “I don’t know what was going through my head. Look, I just put the head down and look, I went with it and thankfully it went over.”

It was the third successive championship match they had won by a point, the previous one was the victory over 2017 and ’18 All-Ireland champions, Cuala.

Rathdowney-Errill manager John Delaney was gracious at the end.

“The last point they got – I don’t know, he might have flicked over the head but like at this time of the year, that is some score, whether you like it or not. Whether it was for our team or their team, it was a super score.”

For St Mullins’s manager Niall O’Donnell, it hadn’t exactly come as an epiphany.

“James is exceptional. He came out the field and got five points – all quality scores. If we could have left him in the full-forward line, he could have got two or three goals today, no doubt about it. He’s an exceptional player. He could play centre-back quite easily and he’d do a great job.”