The day 14 died in Croke Park: Remembering those killed 99 years ago 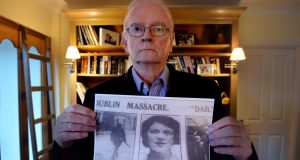 This Thursday in Glasnevin, an important legacy issue for the GAA will literally be laid to rest. On what will be the 99th anniversary of Bloody Sunday, the last three unmarked graves in the cemetery of those who were killed by police and military in the Croke Park massacre will be replaced with commemorative headstones.

It is part of the ongoing Bloody Sunday Graves Project, largely inspired by Sunday Times journalist Michael Foley’s accomplished and haunting account of the atrocity, ‘The Bloodied Field’ published five years ago.

Next year the centenary of that fateful Dublin-Tipperary football challenge will be marked on the occasion of the second Test of the recently announced International Rules series between Ireland and Australia.

This is highly appropriate in one way – and not because the series has occasionally recreated the worst violence seen in Croke Park since 1920; it was a previous Test match four years ago that marked the 95th anniversary and 14 flames were lit on the Hill 16 terrace but more lastingly, the evening produced the seed of an idea that continues to grow this week.

In the programme for the 2015 Test, Michael Foley wrote about Bloody Sunday and GAA communications executive Cian Murphy was struck by the lines: “For all the years of outrage and anger, those killed in Croke Park were buried under decades of politics and historical debate and analysis, their names forgotten. Some still lie in unmarked graves”.

This passage inspired a profound reaction that has served as an ideal interim project between the 95th anniversary and next year’s centenary.

“There had been a selective amnesia even in the GAA,” says Murphy, “about the victims. History books record what happened and the bare numbers – 14 people were killed – but we have set out to remember them as people and not statistics.”

This has been a very significant undertaking. For a long time, Bloody Sunday played a very specific role in the GAA’s mythologising of itself as a major contributor to the struggle for independence.

For example the late Breandán MacLua, who would found the Irish Post newspaper in London, fluently articulated this perspective in Peter Lennon’s fascinating 1967 black-and-white – literally and metaphorically – polemic, ‘The Rocky Road to Dublin’.

MacLua, then the association’s executive officer, was identified only as the ‘assistant secretary of the GAA’ in the film.

Jerome O’Leary, from Blessington Street and at 10 the youngest victim on the day, was shot in the head as he sat on top of the wall at the Canal End

“The Gaelic Athletic Association is of course,” he argued, “something much wider than a sports organisation. It was founded for the purpose of utilising sport to inject manhood and nationalism into Irish manhood at a period when the spirit of the Irish people was very low and very weak after the famine and centuries of persecution.

“All the movements which have led to the establishment of the State, which we have, have drawn their members – be they fighting members or active political members – from the ranks of the Gaelic Athletic Association and as such it has been the reservoir of Irish manhood, who have played their part in the evolution of the State.”

Part of that evolution was the GAA’s own blood sacrifice on Bloody Sunday. This was chiefly memorialised in the person of the most famous victim, Tipperary’s Mick Hogan, the only player to be killed and after whom the Hogan Stand was named.

The others remained strictly a supporting cast. Of the 14 who died, seven lay in unmarked graves until four years ago and these have been meticulously addressed.

Starting with Jane Boyle – a 26-year-old shop manager from Dublin who had been due to be married the following week to Daniel Byron and who was buried in her wedding dress – all have been commemorated.

Obviously the work has been done in conjunction with any remaining family descendants, says Murphy.

“We simply say to the families we have identified: we are here and prepared to be of assistance if you’d like this work done. We are conscious that whereas they are part of our history and the wider GAA family, they primarily belong to their own families.”

Jerome O’Leary, from Blessington Street and at 10 the youngest victim on the day, was shot in the head as he sat on top of the wall at the Canal End.

Michael Feery, a 44-year-old unemployed veteran of the first World War from Gardiner Place, bled to death having impaled his leg on a spike while trying to escape over a wall from the shooting. He would spend four days in the Jervis Street morgue before being identified.

Patrick O’Dowd, 57, a labourer from Buckingham Street, having scaled the wall between Croke Park and the Belvedere College rugby grounds, stopped to assist another man in his climb but as soon as he had helped him drop to the other side was shot dead.

With the centenary in sight, it is timely that the GAA’s focus on Bloody Sunday has switched away from the blood sacrifice for the cause of freedom and onto the human cost

All three will be remembered on Thursday.

There might be institutional remorse in that the GAA could have called off the match. The association’s late official historian Marcus de Búrca in an address to mark the 85th anniversary in 2005 expressed himself “amazed” that it had been allowed to go ahead given the widespread policy of reprisal.

But the GAA had always emphasised its distance from the military campaign for independence and Luke O’Toole, then general secretary, was believed to have felt any cancellation because of the killing of British agents that morning would have suggested complicity.

With the centenary in sight, it is timely that the GAA’s focus on Bloody Sunday has switched away from the blood sacrifice for the cause of freedom and onto the human cost. That day had a seismic impact on how history unfolded but it also came at a terrible cost to families and individuals – 14 people who went out to see a football match and never came home.