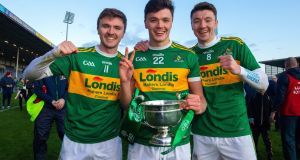 Clonmel Commercials’ hold over St Joseph’s Miltown was maintained on Sunday afternoon after a late four-point blitz dramatically edged them into the Munster Senior Club Final in a fortnight’s time.

In front of a crowd of 1,715 in Hennessy Memorial Park, it was hosts Miltown that appeared set to complete back-to-back provincial final appearances when leading by 0-7 to 0-5 by the 55th minute.

However, having prevailed in previous clashes in 1990 and 2015, Commercials would garner an unlikely hat-trick over the Clare champions after the Kennedy clan of midfielding brothers Jack (two points) and Conal, along with namesake Séamus, ensured a four-point turnaround at the death.

Up to that juncture, Miltown were never headed after taking the advantage of a strong wind to build up a three-point interval cushion in what was a low-scoring yet utterly compelling tie.

Midfielders Oisín Looney and Conor Cleary began the home charge with points in the opening 90 seconds. So while Clonmel settled through Kevin Fahey and Michael Quinlivan by the 10-minute mark, it was the intercounty experience of the Kelly and Cleary brothers that would up the ante for St Joseph’s for the remainder of the half.

Gordon and Graham Kelly, along with twins Eoin and Conor Cleary, provided the leadership and more significantly the scores to ensure that Miltown grabbed four of the last five points on their way to a 0-6 to 0-3 half-time cushion.

Commercials’ wind-assisted backlash didn’t initially materialise after passing up three placed balls in a scoreless third quarter. And even when Jason Lonergan converted a brace of frees soon afterwards, a Conor Cleary reply at the other end left St Joseph’s clinging to a healthy two-point advantage with just five minutes of normal time remaining.

Midfield siblings Conal and Jack Kennedy would alter that narrative to regain parity by the 57th minute before the former also teed up recent Tipperary All-Ireland winning hurler Séamus Kennedy to nudge Clonmel in front for the very first time in the next passage of play.

With six minutes of additional time to come, all was not lost for the hosts but despite their best efforts, the final score would be obtained by a momentum-fuelled Commercials as Jack Kennedy provided the insurance point in the 64th minute to tee up a second Munster club decider in five years against Cork’s Nemo Rangers.

1 Monica Seles: The warrior queen who could have been the best ever
2 Eamon O’Shea: We spent quite a bit of time talking about older people rather than to them
3 Matt Williams: Six Nations must recognise the desire for revolution outside Europe
4 Glorious Greenwood as Man United thrash Bournemouth
5 Leeds move four clear as Brentford add to Wigan woes
Real news has value SUBSCRIBE