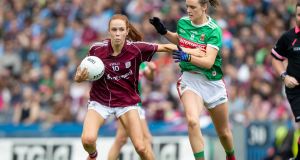 The sound of the final whistle in Kilkerrin Clonberne’s All-Ireland senior club semi-final against Foxrock-Cabinteely earlier this month was, says Olivia Divilly, “magical”. Three times in the previous five years the Galway club had fallen at the semi-final hurdle, to the point where they were beginning to wonder if it was ever going to be. But with the help of nine points from Divilly, the latest in a long line of outstanding performances for club and county in 2019, they banished those disappointments and earned a place in the club final for the very first time.

“It’s hard to describe it,” she says. “I’ve been playing for the club since I was 14 and we suffered plenty of heartache since then, but you look at Annette Clarke who has been involved for so much longer. She captained Galway when we won our only All-Ireland [in 2004], but she probably suffered twice as much heartache as me in her time with the club.”

“We’ve had plenty of success in Galway, but we just weren’t able to cross the line when it came to the All-Ireland. So, to reach the final, at last, was … yeah, magical. The club means everything to us. We’re such a tight bunch, even though there’s a big gap between the youngest and the oldest on the team, we all get on so well. We’ve grown up together. It’s just so special.”

So, after what had already been a long year for Divilly has been stretched to next Saturday, when Kilkerrin Clonberne meet reigning club champions Mourneabbey in the final at the Gaelic Grounds in Limerick (5.0, live on TG4). In fact, she’d be forgiven for feeling like 2019 began at least 18 months ago, her footballing schedule, between county and club, since the turn of the year having an unrelenting look about it.

Not that she’s complaining, she’s never enjoyed a season more having played a pivotal role in what was a hugely encouraging year for a young Galway side, her form earning her an All Star nomination. Back in May they reached the National League final, losing by two points to Cork, and come September they took the county to its first senior All-Ireland final since 2005, Dublin completing their three-in-a-row in a low-scoring affair.

And now she’s part of the first team from the county to reach the club final since St Grellan’s in 1990. And only one Galway club has ever won the title, but you have to go back to long before Divilly was even born when the feat was achieved, by Galway Gaels in 1982.

To add themselves to the roll of honour, Kilkerrin Clonberne have to get the better of a Mourneabbey side that finally cracked the winning code last year when they beat Foxrock-Cabinteely in the final, having lost three of the previous four deciders. And they reached two of those finals, in 2015 and 2018, by beating Kilkerrin Clonberne in the semi-finals.

“We owe them alright,” says Divilly, “last year’s defeat hurt especially, we just didn’t perform to our ability, and it was such a long year to get back to where we are now. I always stay optimistic and keep trying to look forward, but it was really hard after that one, it was such a long road back. The important thing is to learn from your defeats, and I think we’ve done that. We’ve been growing in confidence all the way, beating Carnacon in the Connacht final and then Fox-Cab has given us real belief. But we know what we’re up against too, Mourneabbey aren’t champions for nothing. They have a lot of talented, experienced footballers, so we know we have to be at our very best.”

If she’d made a different choice, Divilly could well be in Australia now while her club-mates prepare for the final, the 23-year-old, who works as an occupational therapist in Galway, having been invited to take part in the Australian Football Women’s League trials in Melbourne after she’d finished her season with the county.

“It was just about going to see if it was something I’d like to pursue in the future. It was a very good experience, I really enjoyed it, but I’m just in my first year out of college, I have my first job, we’ve been having a lot of success with the club, so I’m not in the position to up and leave for four or five months. Growing up I always thought playing football for a living would be brilliant, but it’s not possible for now – but who knows, maybe another year.”

That, then, is for another day. For now, Saturday’s game is her sole focus. “I would do anything to win the club All Ireland, it’s all that’s been on our minds since we finished with Galway. Reaching the final is fantastic, but that’s not enough, we want to bring that trophy home.”