GAA confirms Allianz League finals will finish on the day 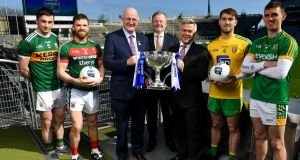 The GAA have confirmed that both of Sunday’s Allianz League finals at Croke Park will, if necessary, include two different periods of extra-time and then ‘a result on the day’ outcome. It could make for a long afternoon.

The ‘result on the day’, it has also been confirmed, will be a penalty shootout in both codes, beginning with the best of five series, before continuing with sudden death.

It’s the first time that both league final showdowns are being played at GAA headquarters on the same afternoon: the hurling decider between Waterford and Limerick has a 2pm throw-in, before the football decider between Kerry and Mayo is set to start at 4pm. However there be some delaying of that schedule, if the Waterford-Limerick match requires extra-time or indeed the ‘result of the day’ outcome (there is no provision for a replay in either game).

“What is agreed for the day, if required, is two 10-minute periods of extra-time, then two periods of five minutes each, and if after that the sides are still level it will go to a penalty shootout,” said Feargal McGill, the GAA’s director of games administration.

“That’s in football and hurling, and across all the divisions (the division two and division four finals are set for Saturday evening at Croke Park). Congress did agree to make it only the two 10-minute periods of extra-time, but that doesn’t kick in yet, as these competitions were already underway. In due course that will change to just two 10-minute periods, then penalties. So this will be the last time there will be the two periods of 10-minutes, and then five minutes periods, if necessary.”

Last year’s Allianz Hurling League saw those double periods of extra-time (10 minutes each half, then five) and then the result on the day outcome in the quarter-final between Limerick and Clare; it involved 100-plus minutes of actual hurling, and was then decided on a free-taking shoot-out (Colin Ryan sending over the decisive score for Limerick on the seventh ‘attempt’, after Niall Deasy had just missed the previous one for Clare). That game started at 4pm didn’t finish until just before 7pm, when all the added time was included.

The penalty shootout in football was already used this year, when Mayo beat Leitrim 4-1 in a penalty shoot-out in their FBD Connacht League match at Carrick-on-Shannon in January, after it was agreed by the Connacht Council there would be no extra-time.

The curtain raiser for Sunday is the camogie league division 1 final between Kilkenny and Galway, Croke Park, starting at 12pm, although there is no provision for extra-time in that game.

McGill also noted why the hurling final was being played first, despite some concerns of that Kerry and Mayo football supporters may have further to travel: “Some people will always make the argument, the flip side being if the football was on first, they would have to get up earlier. We have the camogie on first, and generally the hurling games are played first in the double-bill, to help ensure the pitch surface is at its best, rather than have it after football. It’s the same with the club finals, we normally play the hurling first. The pitch will always cut up slightly, but the preference is to have the hurling first.”

The hurling final presents a first ever league final showdown between Limerick and Waterford, the Munster rivals also meeting for the first time this year. Waterford, who won through from Division 1B, are in the final for the third time in five seasons, having won against Cork in 2015, before losing to Clare in a replay in 2016. Reigning All-Ireland champions Limerick last won the Division 1 title in 1997, when they beat Galway in a final, played that year in October: they’ve been back just in one final since then, losing to Kilkenny in 2006, losing out at the semi-final stage last