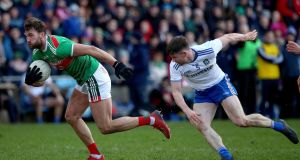 Meath’s march back into the big-time has overshadowed Donegal’s to an extent, but the return of the Ulster champions wasn’t seen as that big a deal, as they were hot favourites to do so.

More strikingly, Declan Bonner has used the opportunity to deepen his panel and still get promoted. Their progress included a win over Meath in Ballybofey with a late turnaround.

Otherwise Meath have had an exemplary season, their defence hardening into one of the least hospitable in the league, and their energy and industry making them very hard to beat. Mickey Newman has returned and Barry Dardis has been displaying a prolific touch in the vital run-in fixtures.

The problem with this match is that Donegal have strengthened. Michael Murphy – suggested by one Meath man to have probably played more times in Croke Park than the entire opposition – is back and the team showed razor teeth in shredding Kildare last week.

If Meath can stick to their task, tracking Donegal’s movement and making it hard for them to score, they have a chance of creating an upset, but in the end, a decent performance and reflective result will be welcome enough.

Leitrim’s main work is done with promotion secured. The defeat by Derry two weeks ago came after that and was played out by two shadow teams. Emlyn Mulligan looks likely to start on the 40 in order to optimise scoring opportunity for Darragh Rooney and Ryan Reynolds, but the big challenge will be around the middle where Derry’s physique and athleticism can cause problems.

There is also the natural gap between the counties. Derry’s slide into Division Four was never an accurate reading on their status, and recent league campaigns had been disrupted by the club commitments of Slaughtneil players. They were always going to go back up to the higher division.

Leitrim have been benefiting from some very good under-age teams, and Terry Hyland’s management has galvanised them in an excellent campaign during which they lost only the one match.

It seems unbelievable but Derry have a handful of players, like Chris McKaigue, Enda Lynn and Ciarán McFaul, who featured in the Division One final against Dublin only five years ago. Leitrim will hope to play smart, keep their composure and stay competitive, but either way they’re on the road back.

Inevitably, the outstanding match in this division turns out to be the key determinant of who gets the last promotion spot. Since lifting the O’Byrne Cup, Westmeath and new manager Jack Cooney shaped up as likely contenders – and still do, despite an at-times wobbly campaign. But Louth have been excellent and have already won their previous two matches against top-four teams Laois and Down. Hesitant vote for the visitors.

The great AFL roulette wheel spins and stops, and two counties – who played just a fortnight ago – find themselves eyeballing each other in the final. That may sound random, but the consistency with which the league confirms championship contenders year in and year out has been relentless in the past decade.

Since 2010 just four of the league finalists have failed to reach at least the following summer’s All-Ireland semi-final.

This is also one of the great championship rivalries of that time, with replayed All-Ireland semi-finals in 2014 and 2017 plus Kerry’s at the same stage in 2011, which curiously remains the county’s last win over Mayo in Croke Park.

Both counties began the league with new managers and distinct requirements. James Horan, on his second tour of duty, needed to find some fresh blood to rejuvenate the challenge of the veteran troupers who have been on stage for virtually the entire decade.

Peter Keane’s task was to speed the evolution of Kerry’s gilded youth into a revived senior team and tighten up at the back, which has been more than achieved by conceding an average of five points a match fewer than in last year’s league.

Their work rate has been terrific and the shrewd recalls for Jack Sherwood and Tommy Walsh have added experience to the team.

It was all the more commendable for Mayo to raid Tralee on the St Patrick’s weekend after a couple of poor performances, and with Kerry on 100 per cent. It was a bit of a grind and driven from centrefield where Aidan O’Shea earned the Man of the Match gong and Matthew Ruane gave another fine display, capped by the decisive goal.

Goalkeeper David Clarke is expected to miss out, but Rob Hennelly was excellent on Mayo’s recent visit to Croke Park to play Dublin.

There are good reasons, though, to believe that Kerry can turn this around. A nice afternoon on the Croke Park surface will suit them better than a torrential Saturday evening in Tralee, allowing them test Mayo with mobility and pace as well as allowing Seán O’Shea and David Clifford, who didn’t play the earlier match, more latitude.

Mayo are very practised at the venue and have the physical advantage over Kerry. It is, though, quite difficult to beat the same opponents twice in competitive matches over short space of time – as evidenced by the striking statistic that, since 2010, only Cork in 2012 and Dublin in 2016 have actually beaten their final opponents for the second time in a league campaign.

1 ‘For 25 minutes I ran out of oxygen’: Pepe Reina on his coronavirus battle
2 Garry Ringrose to stay with Leinster as he signs two-year central contract
3 Fairyhouse and Punchestown festivals cancelled as National Hunt season ended
4 America at Large: On Long Island, longing for a return to our field of dreams
5 Australian rugby staring into abyss as another crisis hits
Real news has value SUBSCRIBE

Gordon Elliott backs decision to end jumps season but rues lost opportunities 18:30
America at Large: On Long Island, longing for a return to our field of dreams 18:00
Fairyhouse and Punchestown festivals cancelled as National Hunt season ended 17:48
Wimbledon will not be held this year due to coronavirus crisis 16:51
Playoffs set to be moved again as Uefa prioritise European club competitions 15:59
Crossword Get access to over 6,000 interactive crosswords