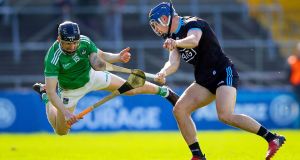 The warm afterglow of Limerick’s All-Ireland was undimmed in Nowlan Park on Sunday after a more comfortable win over Dublin than immediately evident from the scoreboard.

At the end of the first Allianz Hurling League semi-final, the winners had a score to spare but that was more of a tribute to Dublin’s refusal to buckle – and Limerick’s 11 second-half wides – than any white-knuckle ride of a finale.

The high point of the process was a determined push at the start of the final quarter, which yielded 1-5 without reply to leave Limerick nine ahead, 1-18 to 0-12.

The goal was a spectacular example of the team’s combination play at its best: Seán Finn and Diarmaid Byrnes linking in defence before the latter’s long ball up the field, spectacularly caught by Cian Lynch, who came strongly into the match during this defining phase, and played on to replacement Séamus Flanagan, who finished to the net.

Dublin manager Mattie Kenny acknowledged that this run of scores from the 53rd to 62nd minutes had effectively decided the contest, which he described as the most physical his team had encountered so far.

“You had to manage that momentum when Limerick were having their good spell. We allowed it to go on too long and didn’t wrestle back the initiative quickly enough. We did in the last 10 minutes but halfway through the second half is ultimately when the damage was done.”

He was pleased with how his team resisted – a goal by replacement Ronan Hayes and a flurry of points – to cut the deficit, but early disruptions, which saw four players off injured in the first 26 minutes, meant that Dublin didn’t fully harness the wind advantage in the first half and trailed by one at the break, 0-9 to 0-10.

They started with Seán Moran playing sweeper, which according to Kiely complicated things for Limerick and led to a stop-start game.

It was well contested, though. Twice Limerick led by two but for the rest of the first half, there was never more than a point in it. Danny Sutcliffe hit a couple of nice scores for Dublin and Aaron Gillane did the same for the winners. Eamon Dillon burst in for another two for Dublin; Graeme Mulcahy filched a couple back.

Injuries afflicted Dublin, losing Oisín O’Rorke, one of the two-man full-forward line, Seán Treacy and Riain McBride – all to ankle injuries – whereas Daire Gray had to go off for a blood injury.

The sweeper set-up didn’t help them in attack and at times in the second half they were unerringly finding Limerick defenders, most frequently Byrnes, with long ball up the field before going orthodox in the concluding stages.

Despite facing the wind, Dublin defended well in the third quarter with Eoghan O’Donnell excellent in winning possession and relieving pressure, but the winners had too much quality to be thwarted indefinitely.

The amount of possession being gifted to Limerick was also going to be a problem and although Byrnes, whose exuberant display won him the TG4 man of the match award, lapsed into some of the wilder shooting to which he is occasionally prone, his long-range frees were spot-on and he landed four, two in the second half.

Dublin kept in touch with frees from Paul Ryan, on to replace O’Rorke but who also missed a few. After absorbing Limerick’s purple patch, Dublin rounded off with an unanswered four points themselves but, however heartening, it was purely cosmetic.

Limerick are now in their first league final for 13 years, which will go ahead in Croke Park next Sunday as part of the first ever double bill of hurling and football league finals.

It’s been a decent league for both counties but especially Limerick, who have copper-fastened their status as champions and run the rule over the deepest panel in the game at present with 33 players used. Further good news for Kiely came in the re-appearance of All-Ireland full back Mike Casey for a first outing of the campaign.