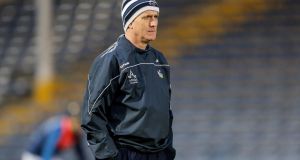 Limerick manager John Kiely: “When you put two teams out on the pitch, and both of them want to win, it is competitive.” Photograph: Laszlo Geczo/Inpho

It’s not a great sign when the manager of any team is defending the nature and structure of the league after the opening round of games. More so when that manager is from defending hurling League champions Limerick.

Part of the issue, it seems, is the restructuring of the 2020 hurling League into two groups of six, with each having equal status: except Limerick’s Group A also includes three of their four Munster rivals in Cork, Tipperary and Waterford (along with Westmeath), while Group B consists of only one Munster team, Clare, along with Carlow, Dublin, Kilkenny, Laois and Wexford.

Limerick came from 10 points down to beat Tipperary last Saturday evening in Thurles, only there was no discernible difference in the mood of both managers afterwards. It was as if Limerick’s John Kiely and Tipperary’s Liam Sheedy both knew the only war that mattered was the Munster round-robin of May and early June.

Kiely was not entirely conceding to that even if winning the league last year was possibly a peak too soon.

“I can tell you one thing, every team that goes out wants to win, every match, that’s fact,” said Kiely. “And when you put two teams out on the pitch, and both of them want to win, it is competitive.That whole idea of it being a phoney war or anything like that isn’t true.

“Are teams going to use an awful lot of their panel? Yes they are because they have to, they want to develop players, they have players with injuries, or playing Fitzgibbon. So you want to use the players across the panel.

“That doesn’t mean you’re taking it any less serious from week to week Every team that goes out every week wants to win their game. Bottom line. No team is being sent out without an expectation of victory. Absolutely none.”

Only six teams will qualify for the knockout stages (compared with eight under the previous format), the top team in both groups qualifying directly for the semi-finals (with the second and third-placed teams going into the quarter-finals). The only threat of relegation is for the two bottom-placed teams in either group, who face into a play-off to stay among the top 12.

There is, however, some incentive for Limerick to make the knockout stages: should they fail their competitive season would finish on March 1st against Westmeath and not resume until the Munster championship on May 10th against Cork in Páirc Uí Chaoimh.

Limerick play Galway this Sunday, their first meeting since the 2018 All-Ireland final which Limerick won 3-16 to 2-18.

“Every game is played on its own merits,” said Kiely, “and I think there are an awful lot of players in the League that would be damn happy with winning a national medal, especially after they’ve finished. And whoever does win will have earned it.”

With gentle irony, perhaps, the most competitive hurling match of round two will not be between Munster rivals, but rather Wexford against Clare in Group B – the first meeting of new Clare manager Brian Lohan and former team mate Davy Fitzgerald, now in his fourth year as Wexford manager.

Fitzgerald may have stood directly behind Lohan in the Clare goal throughout those thick and thin years of the 1990s, although when asked last year about the lasting friendships from that era Lohan wasn’t entirely glowing.

“Generally relationships are very good amongst everyone, bar one player,” Lohan said of Clare’s All-Ireland-winning team of 1995 and 1997, making no effort to conceal who that one player is when speaking at a GAA Legends Tour launch last May.

Lohan was referenced by Fitzgerald in his latest book At All Costs, published in late 2018, after they crossed paths in a Fitzgibbon Cup quarter-final, Lohan then manager of UL, Fitzgerald manager of LIT.

Lohan didn’t want to comment on particular matters but was asked about Fitzgerald’s openly passionate style of management.

“I don’t know if it’s genuine passion. We’re all passionate about the game. We show it in different ways. So, you know, he has the way he does things and people have to kind of fit into that. But I think some of the antics, they’re not great.”

Both managers got off to handy starts last weekend when Clare beat Carlow, and Wexford beat Laois. Clare beat Wexford by 2-22 to 1-22 in last year’s Allianz League, and there shouldn’t anything phoney about the game or the result this Sunday.