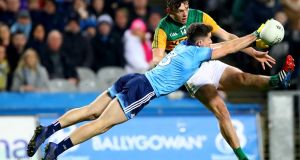 The Allianz football league returned this weekend and brought with it the competition’s flair for voodoo and the unexpected.

On Saturday night in Croke Park, Dublin and Kerry, the glamour fixture, produced a 1-19 apiece draw in a testy 80-minute extravaganza which foretold of more significant meetings down the line. David Clifford, the new Kerry captain, gave a sublime personal performance for Kerry and demonstrated endless composure in kicking his late, late equaliser to leave the old rivals all square and hot under the collar.

Brian Fenton was the standout player for the champions, chipping in with 0-4 in a totemic midfield performance. Kerry threatened to deliver a famous win in Croke Park but, in Dessie Farrell’s first league game, the All-Ireland champions showed that their late-game composure remains second nature to them.

Up in Ballybofey, at the same time, Mayo stunned Donegal with a rocket of an injury-time goal from Patrick Durcan to leave that contest all square at 0-19 to 2-13. Mayo have become a kind of wrecking ball for Donegal, ending their championship last summer and developing a habit of stinging late in league games. In division three, meanwhile, Leitrim came within a few seconds of producing a shock away win over Derry.

And on Sunday in Salthill, Galway and Monaghan settled into a gripping second-half tussle watched over by new managers Pádraic Joyce and Séamus McEnaney. It finished 1-14 to 0-16 to the home side, one of those classically turbulent league encounters which left both sets of supporters with plenty to think about. Meanwhile, Tyrone quietly stepped into pole position in the league with a comfortable win over Meath.

“Small margins,” observed McEnaney when he had time to reflect on a match in which his players have made a hugely brave second charge, to no avail.

“There is going to be very small margins in this division one. The national football league has become so important to teams. Listen, we would love to have left with a point. Galway are a fantastic footballing team. We made it as difficult as we had and it was missed chances that cost us in the end.”

One of the contradictions of the GAA is that while great thought and effort goes into devising ways to maintain the appeal of the All-Ireland championship, the league seems to produce potboiler storylines week after week. It always starts with a bang. Dublin-Kerry was the top billing of a series of highly attractive games which brought out big attendances on the opening weekend.

It’s a front-loaded competition in that while winning the silverware is nice, preserving divisional status has become of absolute importance to managers. Next week brings about another series of juicy rivalries, with the All-Ireland champions Dublin playing Mayo under lights in Castlebar, while Monaghan host Tyrone for what already feels like a must-win game in Castleblaney.

The new playing rules came under scrutiny too in the opening round. The series of high-scoring games undermined the improvisation of the mark, the controversial adaptation which allows forwards to call for an uncontested kick for clean catches made on passes from outside the 45-metre line – provided they travel 20 metres. The character of the game was not noticeably altered, but the potential for the mark to cause a disruption to the flow of the games was evident. Galway and Monaghan shared a point apiece from scores from a mark in Salthill.

We are looking for a better style of football in division one. I think we have arrived with a weekend of fantastic football

“Listen, we are looking for a better style of football in division one. I think we have arrived with a weekend of fantastic division one football. People watching our game want change and want to see a brand of football being played . . . what was the game out there, 1-14 to 0-16, you’d take it in the month of January.”