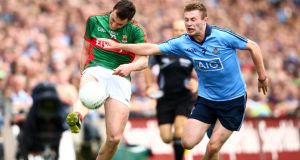 Replays, they’re as predictable as the weather. I’ll start with a throwback to the 1972 All-Ireland football final. I was on a Kerry team that year that drew with Offaly and three weeks later we were sent out for the replay with the words, “go out and play your game”.

It was as if that was all we needed to hear to get the job done, that our tradition of winning would be enough and that by approaching the replay in the same way as we’d approached the drawn game would see us home.

It didn’t work out that way and a team that had Mick O’Dwyer and Mick O’Connell playing in their last All-Ireland finals was blown away by Offaly and I remember all too vividly the powerhouse display from Willie Bryan at centre-field that day.

I go back to that game simply to emphasise how different things are nowadays, chalk and cheese: since last Sunday’s drawn game between Mayo and Dublin, both sides will have conducted intensive video and statistical analysis of every aspect of the game which was unheard of in our day. So, players might leave the dressingrooms for this semi-final replay with similar words to “go out and play your game” but they are backed up with the type of modern, critical and in-depth analysis that wouldn’t be out of place in professional outfits like the Irish rugby set-up or places like Barcelona or Manchester.

No stone will have been left unturned, everything will have been assessed, every player’s performance and that of the opponents calculated to the nth degree in a bid to gain a vital edge. And, you can be guaranteed, Mayo and Dublin will have learned a lot from that drawn game six days ago.

The question is, who has learned the most? The quick turnaround certainly adds to the intensity and of course what happened late on in that match, with the panic that seemed to grip Dublin as Mayo ate into their lead, will likely leave a psychological hangover.

Mayo have a dilemma, because they went in with one game-plan and almost won by adopting a different one when their backs were to the wall. Do they press up on Stephen Cluxton’s kickouts to make them a 50/50 contest as happened late on in that game?

Or do they revert to their original ploy of allowing Dublin get possession and so ensuring the defence is organised and ready so goalkeeper Robbie Hennelly and the fullback line aren’t left exposed? I think they will switch back to that original game-plan.

I thought Mayo gave Dublin too much respect for too long in last Sunday’s match, that they went in with a fear of losing rather than believing they could win. A consequence of that approach was Aidan O’Shea didn’t get the support from other players that he needed, especially against a Dublin defence that looked in disarray for much of the game.

I have no doubt the loss of Rory O’Carroll so early was the main reason why Dublin seemed to hit the panic mode and their lack of discipline, conceding so many frees and often having the ball taken in closer because of arguing with the referee, is something that badly needs to be addressed.

This was the first time all year Dublin’s physicality didn’t allow them to overpower a team. Mayo stood up to them and Jim Gavin has obvious problems at midfield. Michael Dara MacAuley is not the player he was a couple of years ago and Brian Fenton has not been exposed to such levels of intensity before in his career.

It is definitely a problem area for Dublin, and – in attack – I felt Dublin made it too easy for the May full-back line the last day. There were some sublime diagonal balls in the first half but there were too many wayward kicks and it was clear Paul Flynn was getting frustrated with his own inaccuracy and that of others around him.

Diarmuid Connolly is the best example of a scoring forward who can kick with both feet and his absence will be huge for Dublin. Aside from his scoring threat, it will allow Lee Keegan the freedom to join the Mayo attack.

I feel generally Mayo will take great heart from the resolve and the resilience they showed in their fightback and this will give them the belief that they’re capable of going out and winning. They’re as tightly knit a group as you’ll find and there is an admirable determination about them. They desperately want to achieve the ultimate goal of winning the All-Ireland.

If Mayo are to win, then Aidan O’Shea is going to have to get more support. Cillian O’Connor was superb with placed balls the last day but he and Jason Doherty are going to have to give better back-up to O’Shea and I also think they’ve unearthed a real gem in Diarmuid O’Connor to Kerry’s Donnchadh Walsh in the way he links backs with forwards.

If Dublin are to win, then I believe they need to adopt more of a running game than the last day which means getting Jack McCaffrey, Ciarán Kilkenny and Kevin McManamon on the ball so they can burst into space and it will also release Bernard Brogan. Dublin’s discipline in their own half also needs to improve so that Mayo aren’t given so many frees because O’Connor will punish them time and time again.

Before the first game, I thought Dublin would win. I’ve changed my mind. This time, I think Mayo will win. If Mayo run hard at the Dublin defence they will find gaps.

There was a huge lack of composure in the Dublin defence when things started to slip away on them last Sunday. Rory O’Carroll’s return might bring back some leadership to that area but I feel the Mayo mental approach is very strong and that they have more heart than this Dublin team.