John Kiely makes one change as Limerick take on Waterford 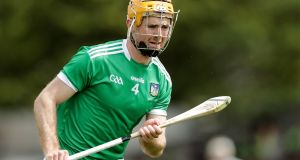 Richie English is on the Limerick bench for this weekend’s clash with Waterford. Photograph: Laszlo Geczo/Inpho

Limerick hurling manager John Kiely has made one change to the team for Sunday’s Munster final against Waterford in Thurles. David Reidy comes in in place of Darragh O’Donovan with Kyle Hayes named at wing back where he surprisingly started the semi-final win over Tipperary.

Reidy is listed at centre forward and Cian Lynch reverts to centrefield. There is heartening news in the selection on the bench of 2018 All Star Richie English, who has made his way back from a cruciate injury.

Opponents Waterford are unchanged from their semi-final win over Cork. There is greater tactical clarity in the naming of Kevin Moran at wing back and Austin Gleeson in attack where he is listed at full forward.

It is Waterford’s first Munster final since 2016.

Meanwhile Kilkenny manager Brian Cody underlined his unhappiness at the near fatal loss of a 16-point lead to Dublin in the semi-finals when naming his team for Saturday evening’s Leinster final against Galway in Croke Park. Four players have been replaced and the team has a more solid, physical look.

Tullaroan’s Tommy Walsh is picked at left corner back in place of Ciaran Wallace who debuted in the semi-final.

Both Paddy Deegan and Richie Reid drop out of the half-back line with Cillian Buckley and Conor Fogarty, the last day’s starting centrefield, taking their places and Conor Browne and Richie Leahy coming into the middle.

Up front Billy Ryan makes way for Martin Keoghan, as Kilkenny go after both a first win over Galway and a first Leinster title in four years.

In the big All-Ireland hurling qualifier in Limerick on Saturday, Tipperary make three changes to the team that lost the Munster semi-final. Patrick Maher is back after missing more than a year between the cruciate injury that kept him out of Tipp’s All-Ireland win last year and the pandemic.

Opponents Cork are unchanged and have good news in the inclusion on the bench of Darragh Fitzgibbon, who picked up a hamstring injury last month but is now recovered.

Mark Moran of Westport makes his first start for Mayo in Sunday’s Connacht football final against Galway. In the only announced change to the team that dethroned provincial champions Roscommon, Moran replaces Ryan O’Donoghue at centre forward.

Galway manager Pádraic Joyce names four debutants on his selection and one further change. Full back Seán Mulkerrin, centrefielder Cein D’Arcy, wing forward and corner forward Paul Kelly and Dessie Conneely start their first championship. Team captain Shane Walsh also returns but another top forward Damien Comer is still out with injury. Galway have yet to play in this year’s championship, having received a walkover from Covid-affected Sligo whereas Mayo are playing a fifth match in successive weeks.

Kieran McGeeney has named the Armagh team to face Donegal in the Ulster semi-final at Kingspan Breffni on Saturday afternoon with Callum Cumiskey and Niall Grimley named to start as they were against Derry before being replaced by Greg McCabe and Jarlath Óg Burns who aren’t named this weekend either.

Jack O’Connor’s Kildare team for Saturday’s Leinster semi-final with Meath shows one change from the side that started last weekend’s quarter-final success over Offaly. Matty Byrne comes in for the experienced Fergal Conway.

Down are unchanged for their semi-final against Cavan on Sunday in Armagh.