If GAA is so squeaky clean then why kick against dope tests?

What do GAA players have to hide? It should be willing to be tested the same as other sports 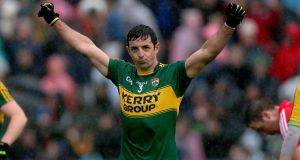 Kerry footballer Aidan O’Mahony: got off with a warning in 2008 after twice the permitted level of asthma medication salbutamol was found in his system. Photograph: Donall Farmer/Inpho

Ten years ago, after an anti-doping test revealed twice the permitted level of salbutamol in his system, Kerry footballer Aidan O’Mahony got off with a warning. As an amateur GAA player, how was he to know his asthma medication was in fact strictly monitored by the World Anti-Doping Agency?

O’Mahony was tested in-competition, after the 2008 All-Ireland final defeat to Tyrone, and the level of salbutamol in his system registered at 1,977ng/ml, almost twice the 1,000ng/ml threshold permitted for users of asthma inhalers, above which is considered performance-enhancing. More or less the same amount of salbutamol found in the system of British cyclist Chris Froome after stage of 18 of the 2017 Vuelta a España.

In February 2015, five days after an anti-doping test carried out at the Monaghan football training base in Cloghran, the anabolic steroid stanozolol was found in the system of Thomas Connolly. The same stanozolol that was found in the system of Canadian sprinter Ben Johnson at the 1988 Seoul Olympics. Connolly pleaded innocent, claiming the steroids had been given to him by a work colleague. Sure how could he have known? The mandatory four-year ban was reduced to two.

In May of last year, more than 13 months after returning a positive test for the banned stimulant methylhexaneamine (MHA) in the immediate aftermath of Kerry’s 2016 league defeat to Dublin in Croke Park, Brendan O’Sullivan was confirmed to have served a reduced suspension of just 21 weeks. O’Sullivan argued a case of inadvertently consuming the substance, believing the fat-burning supplement Oxyburn Pro Superthermotech, which contained the MHA, was no different to the caffeine supplements already being supplied to the Kerry football team. Why was he to blame?

On Thursday of this week, Jamaican sprinter Nesta Carter lost his appeal to the Court of Arbitration for Sport (CAS) against the International Olympic Committee (IOC) decision to strip him and his Jamaica men’s sprint relay team-mates of their gold medals from the 2008 Beijing Olympics. Carter tested positive for MHA two years ago, in part of a batch of 454 samples from the Beijing Games which the IOC ordered to be re-tested.

Anti-doping in sport has always been a sort of stand-off between the statistics and the truth, and the same could be said for the stand-off right now between Sport Ireland and the Gaelic Players Association (GPA). For the some 2,000 intercounty players in Ireland – as in currently part of a senior panel – the anti-doping rules are a little different compared to other sports under Sport Ireland, in that players can only be tested at training or at matches, not at home. What difference should that make?

According to their latest anti-doping annual report, now in its 18th year, of the 989 tests carried out by Sport Ireland, across 22 sports, only one came back positive, from an in-competition test. That case, for a banned substance, is still pending, the identity of the sport or individual yet to be revealed.

One positive out of almost 1,000 tests – or 0.1 per cent – is certainly open to interpretation. Depending on what you believe, it means Ireland is pretty squeaky clean when it comes to doping, or else the testing is not quite doing its job. Either way, that one positive test was among lowest returns in that 18-year anti-doping history.

Even with all the necessary sampling boxes neatly ticked – in-competition, out-of-competition, blood, urine, etc – it also raises a question over whether the hefty €1.75 million annual anti-doping cost represents any sort of return on the investment. No wonder Sport Ireland is looking for ways to strengthen its anti-doping programme.

As part of that, it had informed the GPA last December that, from next year, home addresses of players would also be required under their anti-doping agreement, initially for the purposes of intelligence. It won’t immediately mean testing players at home, but it will afford them the option of creating some element of surprise, the key to any successful anti-doping programme.

Only for now, Sport Ireland are withholding those player grants until the GPA agrees to get in line with other sports when it comes to anti-doping, even with the still-special dispensation that players won’t initially be tested at home.

Most athletes will tell you that testing at home is actually easier, and certainly quicker than being held back for hours after training or competition. And of those 989 tests carried out last year, 189 were on cyclists, 188 on athletes, many of whom live a far more amateur life than some GAA players. GAA, with 126 tests in 2017, is a lot further down the list – and yet it provided two positive tests within two years. More, by the way, than athletics.

Something doesn’t add up. Indeed, last year Sport Ireland also produced a survey which claimed 42 per cent of 148 elite Irish athletes, across 14 sports, personally knew others who used banned substances. Six per cent admitted they themselves had knowingly used one. And while Sport Ireland continues to focus on individual sports, the survey suggested that mostly team sports (71 per cent) were the problem, yet they’re still less likely to be tested.

None of this is to suggest the GAA has a doping problem, right? So what does the GPA have to hide?