New wave of Irish women surfers rising to the challenge 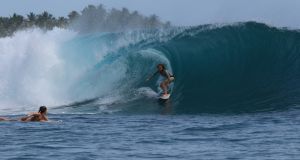 Grace Doyle surfing a wave. “Surf competitions are about luck as well as skill. I’ve been unlucky sometimes in heats where just a few waves come through”

School’s out for summer, and for one mathematics teacher the last bell means time to concentrate on preparing for the World Surfing Games in September.

From Tramore in Co Waterford, Grace Doyle grew up in the water, and we’re not talking about any ordinary love of the sea. She competed in swimming, surf-lifesaving and water polo, but went surfing too whenever she could find the time. Slowly Doyle’s love of surfing grew until a few years ago it pushed the rest overboard.

As a sport surfing has been growing in popularity, helped in Ireland by wetsuits which allow hours in the icy seas. The latest step was confirming surfing as a new Olympic sport for Tokyo 2020. With just 20 spots for women from all over the world, Doyle crunches the numbers and simply says it would be a dream for any surfer.

Competitions like the Irish National Championships block out up to three dates and choose the weekend with the most suitable weather to give everyone a fighting chance. During a typical surf competition, short heats take place all day, with team-mates cheering from the sand.

Doyle explains: “Surf competitions are about luck as well as skill. I’ve been unlucky sometimes in heats where just a few waves come through. You are on the clock – so you have to do solid turns but you also have to be clever about what waves you choose and how to maximise your scoring potential.

“You have 20 minutes [per heat] and you are waiting on the waves to come. Bigger waves suit me more, I prefer them. I like four to six foot waves in competitions, I love that in competitions.”

And luckily she also loves the cold water, saying there are few things better than warming up in front of a fire with memories of an afternoon’s surfing under the cliffs. Although she does admit the dreaded “wipe-out” when you come off the board seems to hurt more in Ireland when you hit that icy water.

And when Doyle says surfing helps you get through tough times, she knows what she’s talking about. “If there is anything stressful in your life or something going on, then it’s uplifting to be out there – you feel so much better after a surf.

“I lost my Dad to cancer; surfing helped me get through that. I was 16. He had skin cancer, so I’m very aware of that now.”

The unpredictable weather also affects Doyle off the water. She has been teaching in Co Meath where there isn’t a wave in sight. So instead she spent her weekends in Lahinch, Co Clare, or on beaches in Sligo and Donegal – not knowing until Friday which destination will give her the best training options.

Things could get tense with friends and family, but when you’ve spent your life competing as Doyle has done, people seem to expect nothing less. She says it’s about knowing when to make time for loved ones, so, for example, this summer she returns from training in Indonesia for a friend’s wedding in Tramore, before flying out again to compete in Japan.

Doyle grimaces a little when referring to flights. It’s all very well sometimes training in beautiful places, but it costs a lot to get there.

Supported by surf brands including Billabong Women’s as well as local businesses including a gym AuraLeisure, Doyle’s teaching salary was her main financial support but now she’s putting that on the side for a career break. The three women on the Irish team fundraise for team events through the traditional routes of supermarket bag-packing and cake sales, but each surfer also needs their own income.

Doyle says: “I do find it hard sometimes [but] you only get better by doing more competitions.”

That’s something Zoe Lally from the Irish Surfing Association (ISA) agrees with. Based in Sligo and working with the ISA since 1995, Zoe has seen women’s surfing in Ireland surge in popularity, but says the standard globally is so high a full-time focus is needed to win. Professional surfers can enter the Olympics, which adds extra pressure.

“It’s a male-dominated sport still in terms of numbers, but the number of women competing is much higher now. When I was competing the women would get the worst waves in heats, but now it’s more equal. We make sure everyone gets a fair chance.”

Lally says Grace is right to take the plunge, saying: “I would often get messages from her asking how the waves are, and she would be over here after school to surf. That’s how dedicated she is.”

She points out the insistence of the Olympic movement on gender parity in sports is good news for Irish women as that impacts on funding and the balance in teams. The inclusion of surfing in the Olympics is no small part due to Donegal man Brian Britton, who passed away this year.

Irish surfing already receives funding for women’s training sessions under the Government’s Women in Sport programme. Doyle has taught on these weekends, and hopes to do more to get other women out on the waves.

Doyle says: “In winter I wear a 5mm suit – hood, gloves and boots – so it’s just my face out. It’s not as glamorous as you see in magazines or somewhere like Hawaii. But it’s also nice that we’re not under the pressure women are in some countries to wear bikinis all the time – you just can’t do it here.

“You have women in surfing who want to fit that image, and you have women who don’t. I think for me if I’m to be any sort of role model I want to be myself – not pushing an image that isn’t who I am.”

As the sport grows and makes more room for women, it comes down to choice. Doyle says: “There’s still pressure there for surfer girls to look good in a bikini, so I think as long as young girls coming up in the sport realise that they shouldn’t have to conform to any image, and to just be themselves, then they can just make their own choices about what feels good for them.”

That’s what Doyle is doing this summer and for the months to come; leaving her job and doing what feels right for her surf career at the world championships and beyond.

“It will be great to surf against some of the pros. I’m looking forward to competing against some women I’ve only seen online and on TV,” she says, and adds: “I think the Olympics would be a dream for all surfers. I hope one day an Irish surfer gets to represent Ireland at the Olympics.”

Support the Irish Surf team at: https://www.gofundme.com/world-surfing-games-japan-2018 or join a surf lesson in Tramore taught by the three women on the team on June 9th: https://www.facebook.com/GraceDoyleSurf/