At most, only seven of last year's All-Ireland final team will start against Tipperary 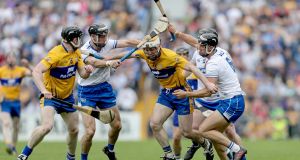 Clare’s Conor McGrath is challenged by Shane Fives and Darragh Fives at Cusack Park. The latter is one of several Waterford players absent through injury for the clash with Tipperary. Photograph: Laszlo Geczo/Inpho

“I don’t know whether to laugh or cry,” says Derek McGrath.

It’s not long past 10 o’clock on Thursday morning and already his week has got worse, if that can be imagined. Since Sunday, they’d been keeping fingers and toes crossed for Maurice Shanahan but the latest update has removed him from the reckoning for the Tipperary game. Another piece gone from a Waterford Jenga tower that is looking wobblier by the minute.

“Yeah, we lost Maurice this morning,” McGrath says. “He hurt his groin during the Clare match but because we had used so many subs, we had to leave him on the pitch. So he’s gone for Sunday.”

Shanahan thus joins Tadhg De Búrca, Barry Coughlan and Darragh Fives as certainties to miss this weekend and indefinite weekends into the future. Kevin Moran’s red card against Clare hasn’t been appealed so he’s gone too.

In any other circumstances, neither Austin Gleeson nor Pauric Mahony would be risked but the likelihood is they will be press-ganged into some sort of service. Noel Connors and Michael ‘Brick’ Walsh both had to be withdrawn at half-time but they can’t not play.

For those keeping score, that’s Waterford’s free-taker and back-up free-taker (Mahony and Shanahan), their sweeper and back-up sweeper (De Búrca and Fives), their only ever Hurler of the Year (Gleeson), their most constant presence (Coughlan) and three of the four players in their panel with multiple All Stars (Moran, Connors and Walsh) who are either unavailable or coming in having not finished the Clare game.

These are all the Waterford animals who are more equal than the others. Even someone like Coughlan, probably the least critically-acclaimed member of their defence, is the only player in the panel to have played every minute of their league campaign and every minute of the last three championships.

Since the summer of 2015, Waterford have played 36 matches and Coughlan started and finished 33 of them, including two that went to extra-time. Now he has three broken bones in his hand and they have a week to find another tick for a box they hadn’t had to give a second thought to since the beginning of McGrath’s second season.

“If you look at our last three years of championship matches and league campaigns,” McGrath says, “Barry, Tadhg and Darragh have been central to everything we’ve done. If you could actually pick players that we have to have that make our team our team, I think they would be as close as you’d come.

“I don’t think in our five years we’ve ever entered a match as a 6/1 underdog. I think somebody said we might even be 7/1 somewhere. I think that’s an indication nationally of what people think is going to happen. Locally, people might be more thinking that we have the players to fill the gaps but we have to face the fact that nationally, that’s what the feeling is. That’s how much those fellas are thought of. The consensus would that those fellas are irreplaceable. But time will tell.”

Of them all, De Búrca is a catastrophic loss, particularly with Fives out of the picture as a replacement. Waterford’s whole game plan hinges on their sweeper mopping up and distributing from in front of the D. As McGrath points out, most teams have some version of that system on the go this summer, so it’s unlikely they will come up with anything radically different structurally. Finding the personnel is the problem.

McGrath gave game time to 32 players through the league, specifically with this run of four games in 21 days in mind. He didn’t envision having to turn to quite so many of them quite so early on but, like his peers on the various sidelines across the country, he did foresee a need for squad depth. For the Clare fixture in March, he kept Mahony back and put Patrick Curran on the frees for the day, just on the off chance.

“Because you just don’t know what’s going to happen,” he foreshadowed to The Irish Times back then. “Pauric could get injured halfway through the first game against Clare and all of a sudden we will need a free-taker who can perform in a pressurised environment. But if we haven’t tested him in that pressurised environment, it’s unfair to expect Patrick to step up.”

Curran didn’t make it off the bench last weekend so if he starts and is on the frees, it will be his first action since the relegation play-off on March 18th. McGrath hasn’t definitively ruled Mahony out and as of Thursday was minded to at least include him in the 26.

“But again, he has a broken hand. What do you ask him to do? This is the highest level – do you let him hit the frees? It’s all decisions we have to make.

“We have planned for things to happen but there’s only so far you can go. There’s still a group of players that you would want on the pitch. We would really, really pride ourselves on detail but I don’t think you can plan for this level of injuries. Not to a forensic extent, no.”

Despite it all, the Waterford manager is adamant there is no pall settling on the squad this week. No feeling sorry for themselves, no gloomy tunes sung about the place.

“It’s been anything but, in actual fact,” he says. “I don’t think there’s any magic to it. We did what most groups are doing, getting in our recovery on Monday and taking it from there. I think the perceptive reaction, there’s two ways of looking at it. You can hide beneath the injuries and dismiss the year as a write-off. Or you can say, let’s get on with it.

All in all, he reckons he might be able to get seven of last year’s All-Ireland team onto the pitch for the throw-in at the Gaelic Grounds. His attitude is that they were always going to face hardship at some stage. They never imagined it would look like this but it was something they talked about at certain points in the spring. Once it was clear they’d be playing four games in three weeks, casualties were inevitable. Not this many, granted. But they can’t be too shocked, all the same.

“I would have always said that you have to plan for four games, seriously and meticulously. But that you had to allow wiggle room for reacting to the psychological mood of the group from Sunday to Sunday as well. That was always going to be a balancing act.

“In terms of ripping up the script completely, partly you’re forced to. I would have said that if we’d had Tadhg, Austin and Pauric available for the whole game last Sunday – this is just hypothetical – but if we’d had them all and we’d won the game, you’d carry on the positivity from that and you’d probably only be making one or two changes for the second game of the four. That would be the original plan, to maybe keep 12 or 13 lads from one game to the next and manage the players that way.

“As it is, I think we’re probably looking at start seven of the team that started the All-Ireland final last September. I don’t know the team yet – I genuinely don’t know how we’re fixed until Saturday evening really – but it looks like I’ll have seven of that team available.

“That kind of fall off could never have been anticipated. So, yeah, because everything has been ripped up, the week has been different. Extenuating circumstances have made it that way. The script is not completely torn up but it certainly has had to be redrawn significantly.”

Under McGrath, Waterford have always been the team that wasn’t supposed to be. When he moved on all the elder statesmen, when he played with a sweeper and one forward up, when he repurposed the centre-back of the decade as a jobbing wing-forward, when he had to go into an All-Ireland semi-final without the suspended De Búrca – on all these occasions, Waterford were the team whose face didn’t fit. And yet somehow, they’ve endured, always existing a rung above their allotted place on hurling’s ladder.

If they can somehow get through the next 15 days still standing upright, it will be their finest achievement yet.