Jim Gavin and Dublin have destiny in their reach 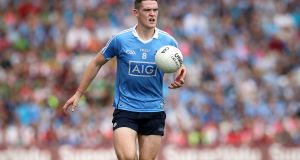 Brian Fenton: Dublin have the game’s pre-eminent centrefielder in the Raheny man who is yet to lose a championship game with Gavin’s team. Photograph: Ryan Byrne/Inpho

The sense of ennui around the place over the past week or two is unmistakable. Maybe it’s been accentuated by the vitality of the hurling season which, even when its finale threatened to disappoint, pumped enough voltage through its injury-time climax to blow up the national grid.

It’s strange because Dublin are on the verge of a landmark achievement. Even in the pioneering days of the 1890s and 1900s (when the capital accumulated 11 All-Irelands) the county never managed to run off four successive titles and in well over a century since, only two counties – Wexford and Kerry, twice, have managed to do so.

Yet it’s not strange. Landmark achievements aren’t that interesting beyond the county recording them and historians of the game. It also affects the mood. No matter how outstanding a team making history is, serial and uninterrupted success always implies a decline in competition.

A quick glance back at the coverage in this newspaper on the day before Kerry completed the most recent four-in-a-row, 37 years ago, and the atmosphere before the final against Offaly has a familiar feel.

One piece by former Cavan player Séamus Conaty under the headline, ‘Rules affecting standards,’ began: “For many people the standard of Gaelic football in recent years has been very depressing.”

Another by well-known author and political columnist John Healy noted archly: “You have to admire Kerry lads for giving the Sam Maguire Cup its yearly outing to Dublin and Croke Park to let the opposition have a look at it.”

In the end the match didn’t even sell out and the joy in Kerry at putting their stamp on the record books again was tempered by the determinedly underwhelmed reaction elsewhere.

This weekend Tyrone arrive in the role of spoilers. Their prospects aren’t greatly rated by the conventional arbiters of punditry and bookmakers but within the county there is, if not quite confidence, a feisty disregard for reputation.

Reasons: manager Mickey Harte has yet to lose a final and there is also a thrilling inkling – not entirely plausible in this view – that Dublin will have some percentage points of complacency to render them vulnerable as well as the undeniable fact that the champions have never given a totally dominant display in a final.

You could add to this that the trimming in last year’s semi-final has created a cause for Tyrone and also fortified them with some cautionary experience whereas July’s quarter-final in Omagh blended this with some equally useful encouragement, as they refused to buckle in the face of Dublin’s six-point lead on the hour, instead squeezing the visitors into a very uncomfortable last 10 minutes.

The psychology of last year will be interesting. One view from the dressing-room is that Harte had tuned the players into genuinely believing they were going to win and the outside consensus – in vivid contrast to this weekend – was that it would be a titanic contest.

When that kind of conviction gets punctured, teams find it hard to cope.

Then again, they were up against arguably the best 20 minutes of Gavin’s entire management. Con O’Callaghan’s early goal was the signature flourish but Mayo recovered from a similar setback in the final and it was the barrage of points that followed which sank Tyrone.

Harte’s team have a great counter-attacking game and if they build a lead it will put pressure on Dublin.

The champions however have been very composed. Their style of possession football leads to enhanced accuracy but fewer attempts at scores, trends visible in the relatively small number of chances missed.

Despite this at times excessive deliberation, Dublin have scored more goals this championship than in either of the past two.

Cian O’Sullivan looks set to start despite the hamstring concern but Tyrone will presumably try and put that to the test from the start and force Dublin’s defensive orchestrator into marking opponents rather than simply space.

Gavin’s match-ups have always been good and Peter Harte and Niall Sludden, who between them created the goal that broke Monaghan, were well marked in Omagh by John Small and Eoin Murchan, which may be enough to earn the latter a reprieve after a difficult semi-final on Ian Burke.

The problem for any team playing Dublin is their range of assets. They are overall physically bigger or at least more mature than their opponents and have the game’s pre-eminent centrefielder in Brian Fenton given that Colm Cavanagh plays as an auxiliary defender although were they to line up on each other it would be a fascinating duel.

After an effective outing on Conor McManus, Pádraig Hampsey is believed likely to take up Ciarán Kilkenny with presumably the Lee Keegan brief from last year’s final – ie to stop him running the game. What tends to be forgotten about that is it’s easier said than done and in any event, Dublin still found a way to win.

Tyrone’s free-taking is erratic whereas Dean Rock, although not on a flawless run having missed three in the past two matches, is capable of handling the burden on a big day, as he showed in last year’s final.

Ultimately this comes down to maximising performance. Tyrone need more sustained performances from key players, such as Harte, Matthew Donnelly and Frank Burns and whereas both Paul Mannion and O’Callaghan laboured in Omagh, Dublin are less likely to be about containment this weekend.

Better players win All-Irelands and although Tyrone are still developing the champions won’t be waiting around.

Ospreys come from behind as Connacht’s home woes continue 19:29
Here is your handy guide to sport on television this week 17:01
Charles Byrnes can saddle runners ahead of appeal against six month ban 17:00
Leicester’s second-half barrage blows Brentford away 16:51
Joe Root’s mammoth vigil ends on final ball of the day 15:00