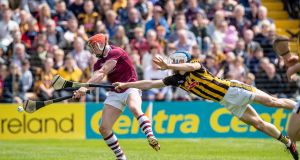 Galway are unbeaten against Kilkenny since 2016 with three wins and a draw.

It’s like being subjected to a game of Jenga, as Brian Lohan watches his players removed from contention by injury and now suspension with the news that David McInerney has failed to get his red card lifted. This leaves just two of the 2013 All-Ireland winning team still around for this match. McInerney’s absence was an influence in the close call with Laois a week ago - creating space for a running game that they will again face here. Wexford will be expected to bounce back a bit from the mauling by Galway but their difficulty scoring will always leave opponents with a chance. David Fitzgerald does, however, know Tony Kelly very well and will ensure that his ability to put up epic totals is curtailed.

Despite the whistling past the graveyard about the impact of weather conditions, Tipperary undoubtedly find it difficult to unleash the menace up front when everything is so slow. Cork won’t, however, be much happier either given their preference for a fast track. What Kieran Kingston’s team won’t bring is the python grip in the middle third, with which Limerick squeezed the All-Ireland champions. Liam Sheedy shakes up his selection, which acknowledges shortcomings the last day and more will be expected of the team leaders. A response can be expected whereas Cork are feeling a bit bruised after two weekends on the paddock and last week’s seriously elevated work rate. This is capable of swinging either way but Tipp look better equipped to handle the slog and take the necessary scores.

This will be fascinating in that the championship needs a prospective rival for Limerick and on evidence to date, that’s Galway. Yet, there is unease at the statistical finger pointing, which outlines the extent to which the Westerners have been putting it over Kilkenny - unbeaten since 2016 with three wins and a draw - in recent times. The likelihood is that Brian Cody will have been emphasising how poorly his team performed in the second half against Dublin rather than how well they played in the first but this is a challenge. Galway’s combination of physical strength and varied scoring threat mightn’t have been tested to the limit by Wexford but Shane O’Neill’s team looked comfortable and powerful. Word is that Daithi Burke may well be back, enhancing a defence that already looked formidable, as Fintan Burke and Shane Cooney stepped up with accomplished debuts. Kilkenny will turn up the heat on Galway’s half backs but will they be able to sustain it sufficiently to let TJ Reid, Colin Fennelly and Eoin Cody exert real pressure inside?

Limerick attempt to retain a Munster title for the first time in nearly 40 years and are hot favourites to do so but opponents Waterford are a team on the up - unlike either Clare or Tipp. So where might they do damage? It’s hard to be adamant on this, as the Cork semi-final wasn’t a great trial run for what will unfold this weekend. Everything with Limerick comes back to the middle third, which dominates proceedings, protects the full backs and supplies the inside forwards. If for instance Tadhg de Búrca has to man mark Cian Lynch - which he’s well capable of doing - the team loses out on his organisational flair and ability to read play. Limerick are such a strong composite of individual talents and a robust, remorseless system that going too far to curtail one element compromises the ability to resist the other. If Austin Gleeson can supply a spark up front and help to orchestrate a push on the Limerick defence, in a way that Tipperary couldn’t that would exert pressure. But it requires too many moving parts.