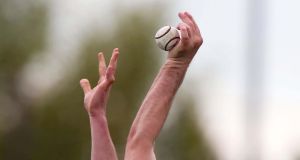 A Galway hurler living in the United States has had a proposed 48-week ban for allegedly not adhering to Covid-19 restrictions thrown out.

John Moylan, who has commuted for several seasons from his home in Boston to play for his native Beagh in Galway, was facing almost a year out of hurling.

But the ban handed down by GAA authorities in Galway has been dismissed on appeal by the Connacht Council and Moylan is free to play whenever games resume.

The Connacht GAA hearings committee found that ‘a clear injustice’ had occurred and upheld the appeal.

The ban centred around an allegation that he did not quarantine for 14 days after arriving back in Ireland prior to a relegation match in September.

Moylan featured in their group games in July and August. Beagh drew with Athenry but ended up in the relegation series when they lost to Killimordaly and Ardrahan.

Moylan returned to Ireland to play in that relegation game in September, scoring a point and helping set up a late goal which saw them beat Kinvara by 3-13 to 1-13 and avoid a relegation playoff against Leitirm/Kinadeema on scoring difference.

Moylan’s father, also called John, is vice-chairman of Galway County Board. The younger Moylan emigrated to Boston some years ago where he runs a successful construction company which also sponsors the Beagh team.

He appealed the proposed ban to the provincial authorities and a remote hearing took place before Christmas.

Declan Bohan, secretary of the Connacht GAA hearings committee, communicated the outcome of that procedure to the player, Galway GAA and the clubs involved.

“Coiste Éisteachta Connacht CLG in arriving at this decision considered all of the points raised by both appellant and decision-maker parties and found that the appellant’s right to a fair hearing was compromised to such an extent that a clear injustice has occurred,” said Bohan.

“Coiste Éisteachta Connacht has further decided to annul the decision appealed against and directs that no further action be taken by the decision-maker, under Rule 7.19(p)(i)”.

Moylan and his club have not commented on the procedure or the outcome.