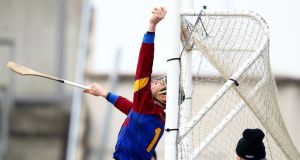 Jason Forde and Pat Ryan hit goals in each half as University of Limerick claimed a sixth Fitzgibbon Cup final victory at the Mallow GAA Complex.

There was no fairytale end to the season for DCU, who were appearing in their first final, after nine points from Donal Burke had kept them in touch for much of the action.

But Forde landed an impressive 1-10 for UL and Gary Kirby’s side sealed a first title in four years with a convincing second half display.

Playing with the advantage of the bitterly cold wind in the first-half DCU landed the first score of the game when Peter Hogan found the target after two minutes, but for the next five minutes the 2015 champions took over and points from Kevin O’Brien and John McGrath were added to by a pair of Jason Forde frees.

While Forde was in super form at one end, DCU relied heavily on the talent of Burke at the other end, and after Conor Delaney and John Donnelly raised white flags, Burke hit his first of five first-half points. His second score from way out on the left levelled matters at 0-5 each after 12 minutes, and when Patrick Curran converted a 16th minute penalty the Dublin side - know for their footballing prowess - were well in the hunt for their first title.

But Forde was superb for UL and after he pointed from play and from a placed ball, Barry Murphy put UL ahead again in the 22nd minute with a great score from the left.

Things didn’t look good for DCU when McGrath sent Forde in for a goal a minute later, but Burke landed a couple of sublime long range scores to reduce UL’s interval lead to 1-11 to 1-9.

Forde accumulated a personal tally of 1-7 in the first-half, but it was Burke who started the second brighter with two more points for his side, although Tony Kelly and McGrath kept pace for UL with good points.

The Tipperary marksman added two quick frees for UL to give them a 1-15 to 1-11 lead by the 40th minute, and further points from David Fitzgerald and Ronan Lynch meant the win was well wrapped up before Pat Ryan’s late goal.