Two from two for Kilkenny after patchy Offaly win 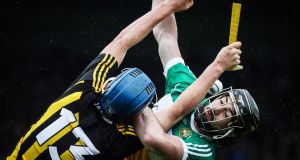 Kilkenny made it two wins from two in this year’s Leinster senior hurling championship, but the Cats know they’ll have to raise their game when entering the lion’s den next week.

“Our form from today won’t be good enough to beat Galway,” warned Kilkenny manager Brian Cody after watching his side labour to a 2-19 to 1-13 win over Offaly in Nowlan Park.

“It was a game we seemed to be reasonably in control of and then Offaly came back into it.

“Things became nervous for a while and we pulled away a small bit in the end.

“We played in patches,” the manager added. “We were very good in patches. Then at other times we a bit careless.”

That patchy performance got the job done in the end, but Kilkenny know they will face a different prospect in Salthill next weekend when the All-Ireland kingpins host the League champions.

The Cats were forced to raise their game in the closing stages after an Offaly revival threatened to reel the leaders in. With less than 10 minutes to play the Faithful County had closed to within three points of their rivals (1-16 to 1-13) after a Joe Bergin goal and Shane Dooley and Oisin Kelly points brought them back to life.

Suddenly Kilkenny had more work to do. A point from the hugely effective John Donnelly was followed by a goal from Liam Blanchfield. The home side were back in control. With a 2-17 to 1-13 lead, they shut the door on Offaly.

As far as Offaly were concerned, it was a game of two halves.

“We are disappointed,” said Offaly boss Kevin Martin. “I thought our work-rate wasn’t really there in our forwards in the first half. In fairness they really worked in the second half, but we could have had two more goals. We thought we’d push them a little closer.”

A tight start meant there was little between the teams in the early stages, with the sides locked on 0-3 apiece. Kilkenny, who started without injured duo Walter Walsh and James Maher, had chances to take control of the game but couldn’t make them count. Luke Scanlon and Richie Leahy teamed up to split Offaly open in the ninth minute, but their hard work came to nothing when Liam Blanchfield blasted his shot wide.

The Noresiders took the lead for the first time in the 16th minute when John Donnelly scored. TJ Reid and Pat Camon traded points before Luke Scanlon and Joe Bergin did likewise before Kilkenny took a big step in front with a 24th minute goal. John Donnelly created the opening with TJ Reid applying the finish (1-6 to 0-5). That kickstarted the home side, who went in 1-10 to 0-7 in front at half-time with the benefit of the wind to come upon the restart.

Kilkenny looked more assured in the second half and had stretched their lead to nine points (1-16 to 0-10) by the 50th minute. Leaking 1-3 without reply made life difficult, but they hit the gas again and charged to victory.