Fermanagh end years of hurt with breakthrough against Armagh 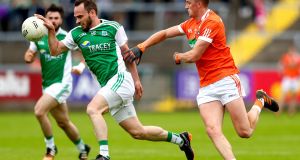 It was the evening that Fermanagh showed they had grown weary of supping sorrow from the rusty spoon of defeat to Armagh.

It was evident from the abundance of smiling faces and grins that a huge psychological hurdle had been cleared.

Fermanagh had not beaten the Orchard County in the championship since that great fairytale in 2004 when they shocked Armagh in the All-Ireland quarter-finals and came within a few points of reaching an All-Ireland final.

The Ernesiders had more heartache in 2008 when they succumbed to their opponents in a replayed Ulster final.

“I don’t remember us ever beating Armagh in an Ulster championship match but I remember lots of defeats.

“I am delighted for these players and there was one thing that was standing out was that they had not beaten ranked above them as such.

“You know Eoin Donnelly, Declan McCusker, Paul McCusker, Che Cullen, Lee Cullen, Kane Connor, Conall and Ryan Jones are all playing a long time and had no Ulster championship victory apart from Antrim who are lower ranked than them.”

“They would feel they had not been successful in the championship and we said at the start of the year that we needed to beat Armagh in the Ulster championship and whatever happens after that and we will move on.”

In contrast former Armagh great Oisín McConville complained about his county’s inability to cope with teams who set up defensively.

“It is disappointing and very similar to the way that things ended up last year.

“Armagh has struggled against teams that set up defensively.

“Everybody knew what way Fermanagh were going to set up and I think that is the most disappointing thing of the whole lot.”

But he paid credit to Fermanagh’s swift breaks from defence and use of the wings after sucking Armagh into the centre.

And McConville compared the Ernesiders to the “Dubs”.

“That was something similar to what Dublin did to Tyrone last year on the counter.

“Fermanagh were able to pull the Armagh defence wide and created a lot of opportunities.”

But he admitted that Niall Grimley’s red card was a “crucial” factor in their defeat.

“Yes because I am sure that Armagh had a plan at half-time, and that was put on the back foot immediately.”

But in truth, Armagh were on the back foot from the off with the outstanding Declan McCusker and midfield pairing of Eoin Donnelly and Ryan Jones dictating matters.

They managed to suck their bigger opponents into central positions and then broke like lightning up the flanks where their quick ball carriers set up numerous chances.

And, in Seamie Quigley they have a flamboyant finisher in the mould of Frank McGuigan.

No team will relish taking on this increasingly confident and cohesive team under Gallagher, a vastly experienced manager who is relishing a fresh challenge on home soil, after so many successful years with Donegal.