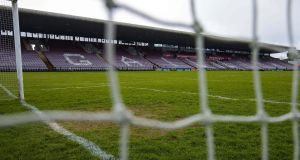 Turloughmore will face either St Thomas’ or Cappataggle in the Galway hurling final. File photograph: Inpho

Turloughmore remain on course for a first Galway SHC crown since 1986 after holding off the challenge of a youthful Loughrea side at Pearse Stadium.

It’s 30 years since Turloughmore, the joint fourth most successful club in the county, were last in the Galway final.

They won’t know their opponents for a week with the other semi-final between champions St Thomas’ and Cappataggle, postponed this weekend due to a Covid-19 concern, set to take place next Sunday.

The sides were level five times in the opening half but a goal in first-half stoppage time by Gary Burke edged Turloughmore 2-6 to 0-11 in front at the interval.

Turloughmore got their opening goal from Barry Callanan after 22 minutes but then missed a penalty when Conor Walsh’s effort was saved by Gearoid Loughnane.

They went on to hit four points without reply in the opening six minutes of the second-half and while Keary and Emmet Mahoney responded for Loughrea, they rarely looked like mounting a serious comeback with their goal from Joseph Mooney coming deep into injury-time. Turloughmore finished with 14 men when former Galway captain Fergal Moore picked up a second yellow card.