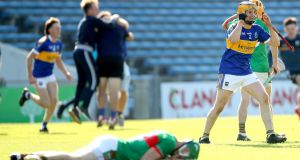 A Bryan McLoughney goal with virtually the last puck of the game won Kiladangan their first Tipperary senior hurling title in a pulsating county final against Loughmore/Castleiney at Semple Stadium on Sunday.

Moments earlier John McGrath looked to have won it for Loughmore with a 65 but there was time for one last attack, McLoughney ran onto a Joe Gallagher pass before roofing to the net to create history.

It was the appropriate ending to a thrilling championship and final where both Kiladangan and Loughmore/Castleiney refused to yield in a game that looked destined for penalties after the sides were level on seven occasions in normal and extra time.

It was tough luck on Loughmore who played their part in an epic final where despite scoring three first half goals, they played second fiddle in terms of possession, but in typical Loughmore style they stuck at it

Loughmore struck for their first goal in the fifth minute as Joseph Nyland’s penetrating run found Ciaran McGrath who did well to pick out Evan Sweeney who pulled first time to the net.

The sides were level at the water break, 0-6 to 1-3, when Loughmore stuck for two goals in as many minutes from Tomas McGrath, and then John McGrath, who benefitted from further unselfish play from Ciaran McGrath.

Kiladangan though fought back with captain Paul Flynn leading the way to trail by just two at half-time, 3-5 to 0-12.

They were level by the 36th minute and then ahead, but Loughmore, despite living off scraps kept themselves in the contest with Noel McGrath and Joseph Nyland scoring as the sides were level at the second water-break before a frantic final quarter.

Loughmore began to get on top in defence with John Meagher outstanding and John McGrath finding some more joy after moving to full forward, they nudged into a two point lead. However, points from Billy Seymour, Declan McGrath and a sixth from Flynn looked to have won the game in added time for Kiladangan before Noel McGrath slotted over a wonder point from the wing to send the game to extra time.

With both sides tiring and making several errors in extra time, Loughmore edged the first period 0-3 to 0-2, and in a frantic second period they managed to go two in front before the returning McLoughney proved to be the matchwinner. He was replaced in the 44th minute but came back on to score two points from play before the match winning goal.

Loughmore/Castleiney will hope to bounce back in the senior county football final next weekend, although any dreams of a double will have to wait another year.