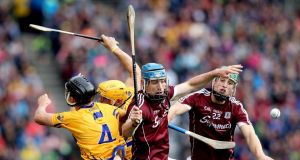 The GAA’s decision not to distribute tickets through clubs, thereby creating an online backlog and physical queues for supporters wishing to attend Sunday’s All-Ireland semi-final replay between Galway and Clare in Thurles, has been branded a “joke” by Clare county board chairman Joe Cooney.

“We found out this morning at about half 10 in an email from Croke Park, ” Cooney told RTÉ. ie. “It is a joke, there are a lot of genuine supporters out there especially elderly people who can’t go online to order their tickets. I believe there are big queues [at official outlets like Centra], I was talking to a man who had to wait two hours online before his turn came around.”

The 46,300 capacity Semple stadium is expected to be a sellout.

Galway will know on Tuesday if All Star centre back Gearóid McInerney and Joe Canning will be fit to play.

McInerney is the major concern for the All-Ireland champions after sustaining an injury – which required a scan on Monday although it remains unclear if it’s a calf or bone (shin) issue – that forced him to limp out of Saturday’s draw.

Canning bashed his knee into the turf in extra-time and was replaced by Davey Glennon.

Conor Whelan, captain David Burke and Adrian Tuohey were also unable to finish the game but all three are expected to recover.

The replay will be televised live on RTÉ 2 at 2pm. That means the football championship match between Donegal and Tyrone in Ballybofey has been switched to RTÉ 1 at 3.30pm with Dublin against Roscommon from Croke Park, at the same throw-in time, going live on RTÉ News Now.

“Cork’s lack of impact from the bench has caught up to them,” wrote O’Sullivan for a Paddy Power column. “It’s something the management should have addressed and said ‘Look, how do we make this stronger’.

We see what Cork had to reintroduce in extra-time, Kingston had to come back on, so did Daniel Kearney for short periods of time. They brought Michael Cahalane on and off again – I’ve no idea what was going on there.”

O’Sullivan also described the decision to keep Cork captain Seamus Harnedy on the field as “criminal.”

“At the start of extra-time Seamus Harnedy barely walked out of the dressing rooms, he could hardly go out onto the field and they persisted with him for six minutes – that’s criminal. That’s putting you on the back foot straight away. Seamus is very honest, but there’s misplaced bravery as well and the management should have been strong enough to say ‘sorry Seamus, you can’t walk’.”

After the defeat Cork manager John Meyler questioned the non-decision to award Daniel Kearney a free at a crucial moment and felt extra-time should not be in rule for an All-Ireland semi-final.

“I never make excuses but if you draw a Leinster final you get a replay,” said Meyler. “You draw an All-Ireland semi final and you don’t.”